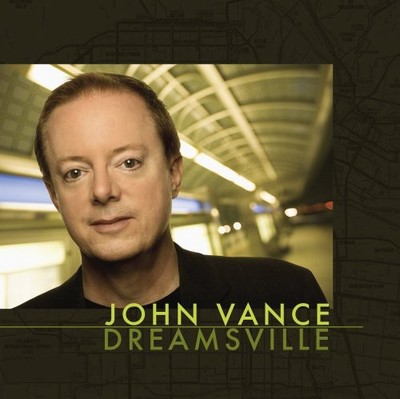 "He has a jazz sensibility that sets him apart from the others." - All About Jazz "...Vance reveals his background as an actor and delivers an emotional reading worthy of an Oscar nomination." - Jazz Review "Light and comfortable... Vance turns each piece into a gentle caress." - LA Jazz Scene "He deserves a wide, appreciative audience." - Cadence Magazine With his smooth vocals, often compared with the likes of Mel Torme and Chet Baker, John Vance reignited his singing career In October of 2003 with the release of his debut album, "It's All Right With Me," on Erawan Records. The collection of standards, with accompaniment from a trio of seasoned Los Angeles-based jazz musicians, was warmly received by both critics and radio audiences nationwide. John is thrilled by the July 17, 2007 release of his 2nd album, "Dreamsville." Again accompanied on piano by Jeff Colella (Lou Rawls' long-time musical director), John is joined on his latest project by Trey Henry (bass), Kendall Kay (drums), Stacy Rowles (trumpet / flugelhorn), and Larry Koonse (guitar). In addition to the title track, penned by Henry Mancini, with lyrics by Ray Evans and Jay Livingston, selections on the new project include Ray Noble's "I Hadn't Anyone Till You," "Darn That Dream" (Eddie DeLange, Jimmy Van Heusen), and "Like a Lover" (Alan and Marilyn Bergman, Dori Caymmi). All the arrangements on the recording are by Mr. Colella. Originally from Arlington, VA, John has lived and traveled around the world with his family, from Paris to Bangkok. He has worked as a singer in Los Angeles at such venues as Spazio (Sherman Oaks), the Gardenia (Hollywood), the Cinegrill (Hollywood), Silhouette Jazz Café (Burbank), M Bar (Hollywood), the Horn (Santa Monica), Bernie's (Westwood), and On Broadway (Santa Monica). On radio, John's music has been heard on KKJZ, KSUR, KKGO, and KCRW in Los Angeles, as well as other stations around the country. While promoting "It's All Right With Me," he performed in Las Vegas on Las Vegas Now, with Dennis Bono, currently airing Friday evenings on KUNV 91.5 FM. He was Doug McIntyre's guest for an hour on KABC 790 AM in Los Angeles, which was his first opportunity to sing live on the air, accompanied by Jeff Colella and Trey Henry. John has been the guest of a number of other radio personalities around the country, at stations that include WUCF-FM in Orlando, FL (Alan Rock) and WLNZ in Lansing, MI (Jim Stone). On television, John had the privilege to sing with many original members of the band, as well as with Jack Jones and Kaye Starr, in "The Glenn Miller Band Reunion" for PBS. The conductor on the show was the late Billy May. In addition to singing, John has concentrated for many years on a career as an actor. Next up is a supporting role in the Universal Pictures film "Leatherheads," directed by and starring George Clooney, slated for a April 4, 2008 release. His most recent TV outing was co-starring, as "Leon," in the season finale of the third season the hit CBS sitcom "Two and a Half Men." He previously appeared, in a co-starring role, as Malcolm's teacher in the long-running Fox-TV comedy "Malcolm in the Middle." He starred as Dr. Harry Hand, alongside Lizzy Caplan ("Related," "The Pitts") in a short comedy for AFI entitled "Hardcore Action News." The project won numerous awards on the film festival circuit. The previous year he had a leading role in the independent feature "Back to the Beginning," as a jilted lover who commits a double murder and then suicide! Other film and television credits include: "The Natural" (Tri-Star Pictures), "Hard To Hold" (Universal Pictures), "How I Saved the World," "Stitches," "10 to Midnight," "Buffalo Bill" and the Movies-of-the-Week "The Cartier Affair," "This Wife for Hire" and "Getting Physical." He has also appeared in many theatrical productions throughout Los Angeles, most notably in the World Première of "Oscar Wilde's Wife" at the Odyssey Theatre Ensemble and "Life on the Line" at the Victory Theatre. National commercials he has appeared in recently include: The Wedding Planner in a promotion for the City of Las Vegas and a spot for Kellogg's Rice Krispies Treats as an Astonished Subway Commuter. An acting student of the late Jeff Corey, and former student of the renowned acting troupe The Groundlings, where he studied with Mindy Sterling, Vance received his B.A. degree in Drama from the University of Virginia.

Here's what you say about
John Vance - Dreamsville.