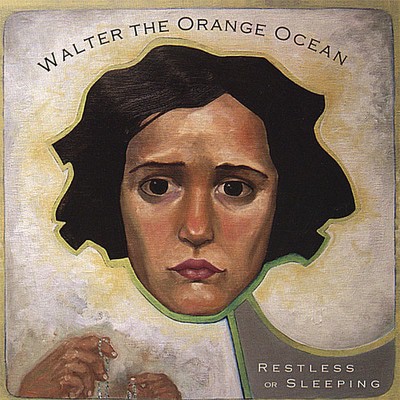 *****Released in a sold-out show at Boston landmark The Paradise Lounge in January of 2007, "Restless or Sleeping" is the debut album of Boston-based band Walter the Orange Ocean. Almost entirely self recorded and produced, it represents just the first chapter of a fresh new band with it's own unique sound. Drawing upon the wide range of influences between the four members, the music spans a variety of styles: from ambitious, multilayered arrangements with eclectic instrumentation ("Making Honey," "Someone Who Loves You," "Comic Book"), to stripped down, traditional song forms ("Song For Progress," "1000 Things"); from straight ahead, piano-based rock ("Anna's Song") to gently lilting ballads ("A State Away," "You Can Only Look"). In addition to their standard piano/guitar/bass/drums lineup, the band made use of a variety of sounds including keyboards, synthesizers, dulcimer, banjo, glockenspiel, an array of guitars, multiple layers of vocal harmonies, and a wide range of percussion. Early reviewers have enjoyed the album's 'smartly written piano-based pop songs and (Daniel Burke's) smooth, strong tenor...' (The Boston Phoenix). *****A cooperative creative group, Walter the Orange Ocean came together around the work of New England singer/songwriter/pianist Daniel Burke beginning in 2005, as he first met Boston bassist/songwriter Stu Pynn, then Connecticut drummer/percussionist Kurt Dyrli, and finally California guitarist/singer Dan Hedley. After just a few months as a group, the band entered the WeAreListening International Songwriting Competition with an early demo recording of the track "Someone Who Loves You." Out of hundreds of entries from around the world, the band won the Grand Prize, and traveled to London, UK to record the song in the prestigious Sphere Studios with British producer Steve Williams. The final version of "Someone Who Loves You," which contest judges called "a great, classic ballad" and reviewers have called "simply beautiful...featuring some remarkable harmonies" (The Groove), is included on this album. *****The beginning of 2007 finds Walter the Orange Ocean promoting, distributing, and gigging in support of "Restless or Sleeping." They can be reached through their website, MySpace site, or at: [email protected]

Here's what you say about
Walter the Orange Ocean - Restless or Sleeping.