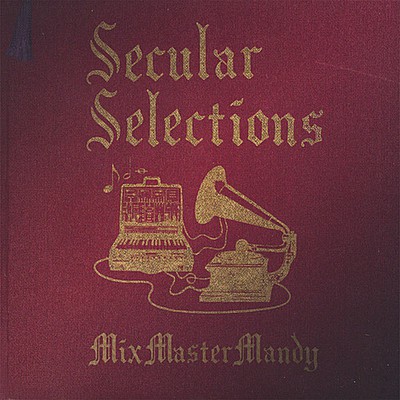 Straight from the colon of country music's capital city comes indie-rocker Mixmastermandy. Unlike the unpleasant process of reverse peristalsis, Mix's music goes down easy...and you won't find any corn in it. Mix refers to her style as Pop, Rock, and Hippity-Hop. Imagine if you will: Queen, Ben Folds, Bill Clinton's saxophone genius, Beck, Patty Griffin, and when Jesse and the Rippers sang at DJ's prom- thrown together in a vita-mix blender and set to frappe for 30 seconds. Pour this into a Care Bears: The Movie commemorative cup, stick in a flexi straw, and enjoy a tasty treat. On her new album, Secular Selections, there is a culmination of her prior musical pursuits, a reflection of all that is Mandy. After producing several demos, this is Mandy's first full-fledged album with no apologies. This short album features what Mandy calls 'folk hop', a fusion of organic sounds like acoustic guitars with an 808 behind it. The CD features songs from her teenage years some of which she wasn't planning on using for her album. But producer Roger Alan Nichols insisted and with some added texture and instrumentation, the songs remained. For each song on her album, Mandy is the only vocalist and plays all acoustic and electric guitars. The point, if there is one, is this: Mandy is different. Right away, it is noticeable that her vocals are unique. She has incredible vocal span and control, and Mandy likes to use all of it. That doesn't always fit with what other people have going on. Mandy has the writing to back it up. Her lyrics tend to play with a lot of off-beat ideas, and are not packaged for commercial use, or for the commercial market. She has a song on her album about a clown and a nun getting together. Enough said. To top it all off, the musicality of her songs play with genres, but does not settle. Just listen to the Theremin solo on Warm. It's like you're in outer space, but not. So, while Mandy might remind you of something you've heard, it's probably not that close when you think about it. Not that it's bad to be familiar, but Mandy has some unique flavor. ..31 flavors and then some.

Here's what you say about
Mixmastermandy - Secular Selections.