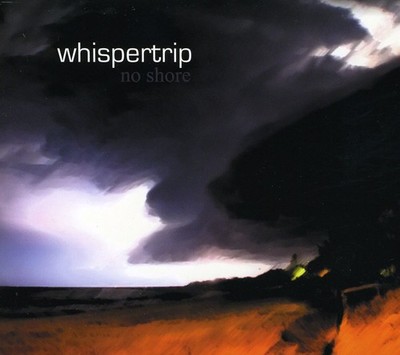 Whispertrip has released their debut ep, no shore, recorded at Santa Barbara's Orange Whip Studios. No shore begins with 'happiest', a downtempo track with a melancholy, musicbox feel. 'one little bit' follows, an elevating electro-pop tune. 'refrain' is a sinister and sweet warning while 'out to sea', the inspiration for the title, is a beautifully bitter song of romance adrift. No shore closes with 'next one', a sparse, acoustic piano ballad of modern-day desperation. Raised in mostly-sunny Santa Barbara, Ashley discovered a world of her own when she heard Bruce Springsteen's 'Philadelphia' on the radio one cold January morning. The sad song had a profound impact; soon thereafter she began working after school at the local record store. Turned on to the atmospheric folk of Beck, Sinead O'Connor, Mazzy Star & Concrete Blonde, she began writing songs and singing in bands in her hometown and nearby Los Angeles. In the spring of 2004 Ashley met David, a classical pianist and signal processing engineer who had recently moved to Santa Barbara to begin graduate studies in Computer Music. Originally an engineering student at the University of Michigan, he was inspired to add a second degree in music when he discovered The Beatles and Radiohead. Influenced by the piano works of Chopin, Schubert, and Debussy, his poignant harmonies and subtle melodies were the ideal canvas for the soulful alto's dark paintings. Shortly thereafter the songwriting duo met Jeff, a self-taught bass player versatile on the upright as well as the electric. A musical lexicon familiar with indie, acoustic and punk genres, his melodic playing quickly became an essential element of the songs. Reinterpreting David's complex harmonies and offering heady grooves with ease and style, the chemistry between the two instrumentalists was instant. Jeff runs his upright through a small battery of analog effects pedals yielding a beautiful, unfamiliar sound. In the spring of 2005 Dan joined the band, a drummer whose influences range from the cerebral punk rock of Bad Religion and Fugazi, to the fluid modern-rock drumming of Shiner and The Life and Times. Dan's tasteful, tempered aggression gave edge to the group's sweetly dark songs. The quartet entered Orange Whip Studios to record no shore in June of 2005. Guitarist Per, originally from Minneapolis, joined Whispertrip in the early months of 2006. Per brings atmosphere to the edges of the music with a subtly modern vintage tone. Alternating between ambient textures and an aggressive melodic pulse, his extended harmonies and dynamic playing are strong elements of the band's newest songs. Per lists Neil Young, Townes Van Zandt, and Gram Parsons, Anton Bruckner and Isaac Albeniz as influences. The band is currently performing and preparing to return to the studio in January 2007.

Here's what you say about
Whispertrip - No Shore.