Ronny Cox - How I Love Them Old Songs 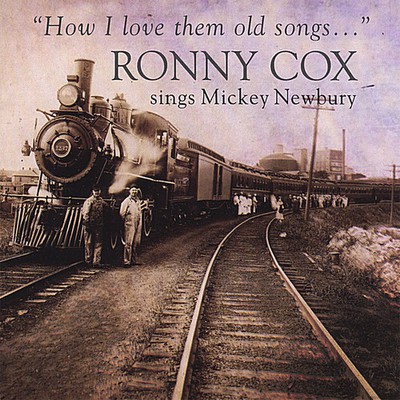 'Ronny Cox is like Tom Russell meets the Sons of the Pioneers, with a social conscience and fine storytelling that touches something deep inside each of us... Larry Wines, Folk Works Magazine and KCSN.' RONNY COX 'Songs, Stories and Out and Out Lies' Musician/Actor Ronny Cox asks, â€œHave you ever wondered how a story of 'questionable veracity' gets started?' And then, as storytellers will do he gives us the answer. â€œWell... some small grain of truth gets twisted and turned and then told and retold. Eventually that small grain has grown into a boulder of â€-undeniable truthâ€™ that you would bet your house on!' In his latest album â€œHow I Love Them Old Songs: Ronny Cox Sings Mickey Newbury', Ronny pays tribute to his friend and one of Americanâ€™s great song writers. As in his previous recordings including 'Ronny Cox at the Sebastiani Theater'(recorded in the fall of 2005 at the Sebastiani Theater in Sonoma, Ca.) as well as in his live show entitled â€œSongs, Stories and Out and Out Lies', Ronny showcases an original, sophisticated storytelling that has a, â€œlyric-driven folky sound'. Be prepared to take a unique & emotional journey with this fun-filled and thought provoking music. This is a one-of-a-kind singer/songwriter and story teller. 'I've always loved old black and white films... 'film noir'...those cinematic images were always so compelling to me,' Ronny said. Referring to one of his stand out songs in his live show and on the new CD, Ronny pointed out, 'When I wrote 'Quintanaroo', I was striving for that same imagery... sort of a 'song noir', if you will, and I love the Mexican flavor of the song. It's also a really intriguing story.' Another highlight of his show is 'Hot Water Cornbread'. ' I got a big kick out of writing that song... and there are several stories I could tell about it's origin... all of them but one would be a lie. I will say this, NPR did a show about hot water cornbread that I found very instructive. Plus, it's just one of those songs that's really fun for me and the guys to play.' While Ronny started out as a musician and has emphasized that side of his career for the past few years, he still is one of the most respected and sought-after character actors in Hollywood. Since his debut in John Boorman's film 'Deliverance' including playing guitar in the famous 'dueling banjos' scene, Ronny has appeared in over 50 films including 'Beverly Hills Cop(I & 11)', 'Bound for Glory', 'Robo Cop', 'Total Recall' and too many others to mention. He has starred in numerous TV movies and in the TV series of 'Apple's Way', 'St. Elsewhere', 'The Agency' and of course as Senator Kinsey in 'Stargate SG1'. And on April 9 of this year he was seen opposite Carol Burnett on ABCâ€™s â€œDesperate Housewives' and another guest spot on â€œCommander In Chief' on May 2. In the past few years Ronny has concentrated on his music. The results include his being named a finalist in the South Florida Singer/Songwriter competition, headlining such venues as the prestigious Old Town School of Folk in Chicago and hitting one of his favorites stops along the way, the annual Kerrville Folk Festival in Kerrville, Texas. While â€œHow I Love Them Old Songs: Ronny Cox Sings Mickey Newbury'is his latest recording, his home grown style of folk music and the story telling that goes with it can be found on previous recordings such as 'Ronny Cox Live', 'Cowboy Savant' and 'Acoustic Eclectricity'. Whether it is in his acting or his music, Ronny is a storyteller, 'and I have been most of my life... and I've never felt the truth should get in the way of a good story. Now, I know a lot people think you should just sing the song but that doesn't work for me. I have found through the years that people love to know something about the song, or the characters, or the circumstances...something!!! I also discovered that if I didn't know the story... I could just make one up. As a matter of fact, people generally get more caught up in the manufactured stories than the true ones. Anyway, about half the stories I tell are 'fudged' a little bit.' Ronny sums it up nicely. 'I'm interested in weaving a tapestry of songs and stories with an over-all arc that eventually comes together and tells us something about 'the human condition'. I know that sounds kinda pompous... but that's what I'm trying to do..... and to have a few laughs along the way.' In his show â€œSongs, Stories and Out and Out Lies' and on the new recording â€œHow I Love Them Old Songs: Ronny Cox Sings Mickey Newbury', he achieves his goal. Every time. Ronny has appeared as a singer-songwriter on: o The Tonight Show with Jay Leno o The Bottom Line in New York with Leon Redbone o National Public Radio, Mountain Stage, with Guy Clark o National Public Radio E-town with the Roches o The Berklee College of Music, Boston, with Richard Thompson o Bluebird Cafe in Nashville with Jellyroll Johnson o The Great American Music Hall in San Fransisco with the Rankins o Chautauqua in Boulder, Colo, with Karla Bonoff o The Crook and Chase Show o Nashville Now and many more! 'So-o-o-o-o excellent. Resonant hearty singing. Swirling melody. Brilliantly evocative.' ------------Robert K. Oermann, Music Row.

Here's what you say about
Ronny Cox - How I Love Them Old Songs.