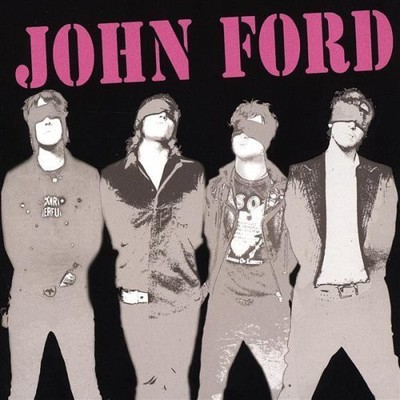 Overview: If you want a record that has rock 'n' roll integrity and will show you the best 40 minutes you've had by a stereo for a long time, do yourself a favour and purchase this record! These Vancouver sleaze-slingers' real secret here is they drain some of the testosterone out of rock and replace it with some sugar on top. Biography: ...Here then is the tale of John Ford, the very BALLS of Vancouver and a living testament to the majesty of moronic rock n' roll music as imagined by Goethe in his epic poem, 'Gewehrkugeln für Träumer'. At a combined height of 291 inches, John Ford tower over many of their Rock n' Roll peers, and outnumber many Power Trios by one. Conceived in the basement of a house in East Vancouver, they constitute the classic garage rock tale; a Cinderella story at deafening volume marked by stupidity, agony, hangover, buggery, madness and defeat. And that was just the first practice. Some years and broken bones down the line we arrive here with the JF Rock n' Roll Juggernaut firmly established as one of the greatest live acts in the country. Toronto's Tim Perlich for one cited John Ford's Canadian Music Week performance for 'making the whole sorry ordeal worthwhile'. Can you name a band that has opened for the Rolling Stones, the Who, Black Sabbath, Kiss and Devo all in the same week? Me neither but John Ford have provided able support to acts as diverse as Matthew Good, the Tragically Hip, Son Volt, North Mississippi All Stars, Joel Plaskett, Zen Guerilla, Big Sugar, Stephen Malkmus, Andre Williams, The D4 and Killing Joke. They also drove all the way to Vanderhoof to upset about fifty Chilliwack fans this one time. And Loverboy. They pissed off Loverboy, too. The vortex of irrational behaviour that seems to materialize around John Ford was perhaps best summed up by Big Sugar's Gordie Johnson, who was once heard to ruefully sigh, 'they're just BAD people'. Describing their music as 'the sound of drunken, angry men hurling bottles at a wall', Johnson nonetheless went thirteen bloody rounds with the band in order to produce their second album, 'Bullets for Dreamers'. Johnson also produced an enormous invoice for his services whereupon the band got drunk and hurled bottles at Johnson. Now virtually homeless and forced into lives of petty theft and 'Toilet Dancing', John Ford have defiantly debunked all those nay sayers who claimed they could sink no further. Yet the band remains unbowed. With victory as their ward, the men of John Ford hoist a grimace and ride into a golden dawn, rowdily offering a toast for the future and adding, 'It can't be worse than the last one.' And with this poetic epithet in mind, it is with overmuch pride that we present to you, the Groovers from Vancouver, the Worst People on Earth, the Electric Rock And Roll Band, and the Very Bummer out of Bumstead Recordings...JOHN FORD! Or... Rich Hope - guitar, vocals Chris Read - bass, vocals Lightnin' Rod - guitar, vocals Adrian Mack - drums, vocals.

Here's what you say about
John Ford - Bullets for Dreamers.