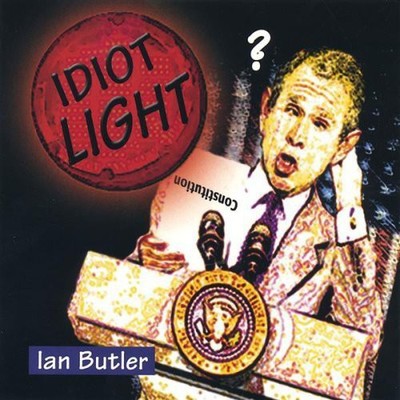 Ian Butler loves America, but he's not too crazy about President Bush. So he departed from a careeer playing funny lowbrow songs for a careeer playing funny lowbrow political songs. His latest CD, 'Idiot Light', features pokes at President Bush, as well as Cheney, Rummy, Limbaugh, SUV drivers, and President Bush (did I mention President Bush?) He also has some fun with art car drivers, war demonstrators, consumers, and his own bladder, but the main focus of the CD is clear, regime change begins at home. Ian is a mulit-instrumentalist who has played in many San Francisco area groups, most notably with Tempest, the Celtic rock band. On this CD, which features a wide variety of styles - from punk to folk and even stand-up; he plays everything, including guitar, bass, keys, drums and vocals. Also included are 4 'Bushisms', short clips of mis-spoken word by 'you know who', which add a running commentary to the music. As the latest polls show Bush's popularity drop near the lowest ever by an American president, this CD unexpectedly finds itself expressing a solidly mainstream sentiment: 'George Bush can Kiss My Tush'!

Here's what you say about
Ian Butler - Idiot Light.