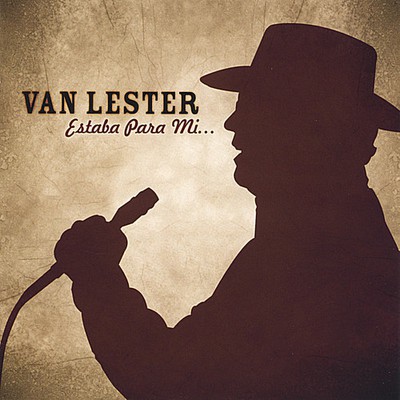 VAN LESTER From a very early age, Van Lester,Born in Rio Piedras, Puerto Rico sang with many local bands. His beginnings were in 1980 when he formed part of Marvin Cardona's 'Conjunto Kaney' as lead vocalist. In 1981 he was lead vocalist for 'Orquesta Arallues' with whom he recorded a single. In 1982 he sang with 'Orquesta Pueblo Latino'. In mid 1982 he started his first ban which he named 'Lester Orengo y su Orquesta'. In 1983 he was persuaded by Erick Figueroa and Eddie Guagua Rivera to become lead vocalist for 'Conjunto Erigua'. He recorded a signle with 'Conjunto Erigua' titlied 'Dimelo Tu:' which wa played favorably in radio stations throughout the island of Puerto Rico during the holiday season. It was Eddie Guagua who convinced him to change he name to a more commercial one, the result, 'VAN LESTER'. In mid 1984, VAN LESTER and Israel 'Ishpacor' Pagan formed a band which they named 'El Sonido De La Bestia' (the soung of the beast). It was with this band that VAN LESTER initiates his talent as an arranger and producer when he decides to record a single titled 'Escondete' with his band. In 1985 he saw his dream come ture when he recorded with 'La Croporacion Latina'; this recording launched his recording career. It wasn't until 1989 that his recording career took off professionally when he recorded two compact discs titled 'Puerto Rico 2013' and 'Banda'lla' along side 'FRANK FERRER and PUERTO RICO 2013'. VAN LESTER gained popularity with the Puerto Rican public with the two hit singles of these productions. 'Hermano Hector' and 'Mi Mama No Quiere' The similarity between VAN LESTER and HECTOR LAVOE captured the attention of producer RALPH MERCADO. He immediately signed a recording contract with FRANK FERRER for RMM Record under the label 'SONERO' to record VAN LESTER. This recording contract makes VAN LESTER part of the permanent 'Stellar Salsa Scene' and helps launch his international singing career with his first CD titled 'Soy La Voz'. VAN LESTER has toured the United States, Central and South America and Europe. In 1993, he had the privilege of visiting Anchorage, Alaska to introduce 'Salsa' to the region. VAN LESTER was awarded a platinum album for his particpation in 'LA COMBINACION PERFECTA' where he recorded with Domingo Quinones the song titled 'TRIBUTO A HECTOR LAVOE'. He was asked to take part in a production for SONY Discos titled 'LOS SONEROS DE HOY TRIBUTO A LOS SONEROS DE SIEMPRE' in which he recorded a new version of 'PERIODICO DE AYER' produced by FRANK FERRER. Subsequently, FANIA RECORDS asked VAN LESTER to finish the recording that HECTOR LAVOE was unable to finish, today this recording is considered a SALSA CLASSIC...... 'THE MASTER & THE PROTEGE'. In 1995, VAN LESTER had the opportunity to have his next recording produced by popular salsa producer JOHNNY PACHECO titled 'EN TRANSICION'. VAN LESTER establishes his own independent recording label in 1996, 'VANLO RECORDS' VAN LESTER records an album titled 'A MI MANERA' with his record label. In 1997, he records with Luisito Rey y Punto a Punto also under the VANLO RECORDS label, in this recording VAN LESTER was producer, arranger and composer. In 1999, after a tour in Mexico, VAN LESTER voluntarity retires from the performing scenes. He moves from New York to Providence, Rhode Island and establishes he's own recording studio, 'DESTY SOUND' where he is currently offering his services as arranger, producer and engineer. Now, after a long absence from the performing scenes. VAN LESTER returns to give to his audience the best of him....... his vocal quality; HIS SENTIMENT. VAN LESTER.. 'THE PEOPLES SINGER...... IS BACK WITH ONE OF TWO NEW CD'S FOR 2005 WITH COOKITA records 'BEST IN SALSA PRODUCTIONS AND LATIN MUSIC'

Here's what you say about
Van Lester - Estaba Para Mi.