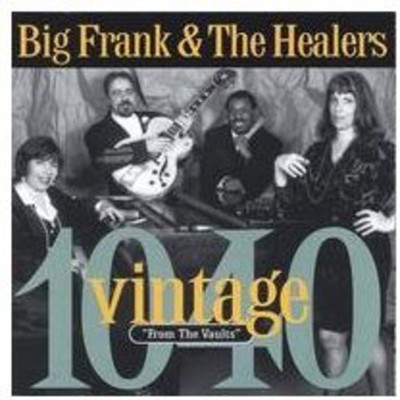 This Is It! -The long-awaited 'Vintage1040-From the Vaults' CD from Big Frank & The Healers. (Recording supervised by the legendary Lenny Kunstadt of Spivey records). Here's What The Press Has To Say: 'Big Frank Mirra plays some nasty slide guitar!' - Graham Clarke, Blues Bytes 'No-nonsense, straight-ahead Chicago blues...Mirra's playing--especially his wicked slide work--propels all the tracks. The overdue 'Vintage 1040' is a real find.' - Bill Wasserzieher, Blues Revue 'Frank's playing is immaculate, his vocals are as declamatory as this music demands, and the band are equally talented. A real gem of a release' - Norman Darwen - Blues Art Studio, Austria '[Big Frank & The Healers] show just how tight a constantly -working band can be!' - 'Broadway' Buddy Fox, Big City Blues 'Big Frank is the closest thing I've heard to Hound Dog Taylor!' - Sonny Payne KFFA radio's King Biscuit Flour show Meet The Band: Big Frank & The Healers are a traditional electric blues band playing chiefly in the Chicago and Delta blues styles, while touching on the swampy sounds of Louisiana and Texas. The band has been cited in publications as far afield as Austria's 'Blues Gazette'. Local favorites, they have appeared in nightclubs and performed at many concerts including the headline spot at the 2004 Lake George Blues Festival. They were featured artists at The Glens Falls Blues Festival, and the Blues 2000+4 Festival. For several years they've played to concert crowds, including performances at Rockefeller Center's City Sounds, Staten Island's Back-to-the-Beach and Twilight series, and at Snug Harbor Cultural Center. Leader, guitarist, and vocalist 'Big Frank' Mirra founded Big Frank & The Healers. On his 'King Biscuit Flour Hour' show, KFFA radio's Sonny Payne likened Frank's playing to that of Hound Dog Taylor. Frank's specialty is slide guitar. His other credits include The Mohair Sam Band and The Street Hawks, an acoustic group which focuses early roots music. All of the Spivey records had selections by Victoria Spivey. Here, Lenny had pianist Doña Oxford sing two of her numbers, 'Dig Me' and 'Don't Trust Nobody'. Doña also handles the vocals on Koka Taylor's 'Please Don't Dog Me.' Doña has toured with Shemekia Copeland internationally and in the U.S. Doña leads her own band, and her two recordings for Fountainbleu records showcase her writing as well as her superb piano playing and singing. Doña has recently been active on the Chicago blues scene and has performed with many artists including Buddy Guy, Phil Guy, Son Seals, Jody Williams, Willie Kent, Sam Lay, and her mentor, the late Johnnie Johnson. Drummer Barry Harrison also toured with Shemekia Copeland. Before that he had a tenure with her father, the legendary Johnny Copeland, until his death. Barry has become the 'house drummer' at New York's prestigious Terra Blues club, working with Michael Powers, Jerry Dugger, Ray Shinnery, Jr. Mack, and Steve Guyger, among many others. Bassist Margey Peters also played in the Mohair Sam band and with 'Wild' Jimmy Spruill, Bob Gaddy, Danny Russo, Somethin' Blue, Squeezebox Zydeco, Big Ed & the Sidepockets, and the Doña Oxford band. About The Record: I never met 'The Great Victoria Spivey', but Lenny talked about her every day. Victoria was, of course, one of America's seminal female blues singers. Leonard Kunstadt (1925-1996) was a discographer, historian and record producer. For almost forty years, he edited Record Research magazine. He is the author, with Samuel Charters, of Jazz, A History of the New York Scene. In the mid-fifties, a dream came true for Lenny: He became Victoria's companion. For the last 20 years of her life, Lenny would accompany her everywhere. Sometimes he'd sit in on kazoo, and Victoria even immortalized him in her song, 'Kazoo Papa Blues'. In 1962, she founded the Spivey record label. After Victoria's death, in 1976, Lenny kept the label alive. Lenny had tremendous belief in and enthusiasm for those continuing to make blues music. He was passionate about the local blues musicians, as witnessed by his column, 'New York Really Has The Blues', which appeared in several European journals. In the mid-1990s, Lenny became a supporter of Big Frank & the Healers. He would come to the performances, cheer the band on, take photographs with his pink Kodak 110 camera, interrupt after every song to make sure that he had the absolute correct documentation, and-ultimately-supervise a recording. 'Vintage 1040' is NOT a Spivey record, but it was to have been one. In fact, it would have been the next in the catalogue, No. 1040. Any similarity to the IRS form of the same name is utter coincidence! Of course, 'Vintage 1040' was cut live in the studio, with no overdubs. This is the first time Lenny recorded 'direct to DAT'. He was even considering-though he hadn't totally committed to the idea-bringing the session out as the label's first CD! Now that recording is available! Booking and Information: contact [email protected]