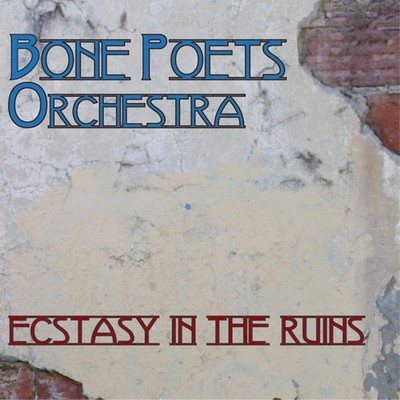 Bone Poets Orchestra is eight tasty players wrapped in a delicious groove with a chewy psychedelic center and a string trio garnish. Ecstasy in the Ruins sounds like a kind of psychedelic chamber pop that lands somewhere between Jethro Tull and Peter Gabriel with visits to Carlos Santana and the Grateful and finally ending up at Lindsey Stirling and Pentatonix. This is Bone Poets' fourth album, Christopher Bingham's eighth. He writes all the music and has managed to gather world class musicians to help make it happen. Bone Poets Orchestra - BIO Christopher Bingham composer, conductor and lead singer for BPO got his start as a band leader through an unusual set of circumstances. Orphaned at the tender age of 10 years old by a tragic greased pig accident at a church picnic, he learned to buck up and roll with the punches at an early age. Ok, not really. The way it all really happend was like this: Once upon a time a Pagan folk rock band swallowed it's tail, embraced it's progressive rock roots and became Bone Poets Orchestra. It's all been driven by lead singer / composer Christopher Bingham who was raised on show tunes through his 60s childhood and passed the acid test in early 1970s St Louis, where the airwaves were filled with golden age progressive rock. He started seriously putting out records in the early 90s, which were blended folk and jazz, but really found his voice when he and his wife, Sue Tinney, started the seminal Pagan band Gaia Consort in 1997. Pagans loved it, but after four records, it seemed the granola crunchiness of the name was scaring away a lot of people who would otherwise give the music a spin. So - a new name: Bone Poets Orchestra became a chance to explore different textures and the old joys from his acid drenched childhood, but all filtered through 30 years of immersion in just about every musical style. Bingham has a 'no stylistic borders' policy - whatever works is what works. But you can hear the influence of Ian Anderson, Bruce Cockburn, Kate Bush, Pink Floyd, Afro Celt Sound System, Peter Gabriel, Carlos Santana. Gaia Consort's last record "Vitus Dance" became the first Bone Poets album, recently re-pressed under the BPO moniker along with a collection of other songs that fell into the BPO framework, titled Atheist Anthems. The first entirely 'consort free' recording is 2010's "Belladonna Smiles. What do they sound like? Bingham, singing lead and playing lead guitar has a clear tenor that gets compared to David Crosby, Dave Mathews, and Bare Naked Ladies. Sue Tinney on co-lead and harmony vocals has is a breathy alto reminiscent of Norah Jones. The string arrangements often sound like a nod to War Child era Jethro Tull. The rhythm section nods to Peter Gabriel's drum sensibilities, with a Jaco-esque moments in the bass lines . There is hammond throughout the keyboards - think Deep Purple - and also plenty of mellotron strings - think Moody Blues. The groove fits the lyric content which inspires allegiance if you celebrate the natural world, polyamory or have ever dipped your toes into psychedelic and alternative culture. Bone Poets Orchestra is a concert band. Live, Bingham leads with stories - sometimes visited by his alter ego, St Crispy, Patron Saint of Flashbacks and Household Clutter - and there is a fair amount of singing along and dancing too. While Bingham does the writing, he's gathered an impressive group of world class players to bring the music to life. Sue Tinney sings co-lead, Dan Mohler on frettless bass, Grammy nominee TJ Morris on drums, Jay Kenney, is co-producer and keyboardist, Larry Golding on violin, Sunnie Larsen on viola and Taryn Webber on cello. Follow these madmen at your own risk, but whatever your poison, be prepared to experience. Bone Poets Releases Vitus Dance - 2007 Belladonna Smiles - 2010 Atheist Anthems - 2011 Ecstasy in the Ruins - to be released March 4th, 2014.

Here's what you say about
Bone Poets Orchestra - Ecstasy in the Ruins.