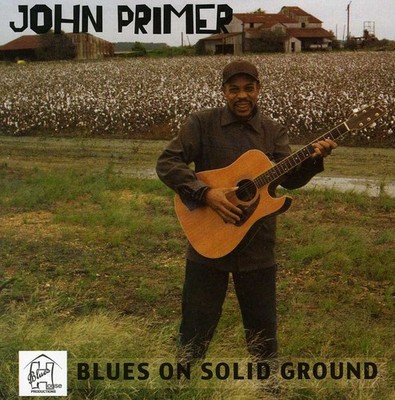 Imagine yourself living in 1945 in Mississippi, being a person of color, on sharecropper land, deep in the woods. Living with your entire family in a shack with three rooms, and without indoor plumbing or heat. You're sharing the daily back-breaking work of picking cotton or corn in 90+-degree weather from sun up to sun down. You're doing all this work every day just so you and your family can eat another day, never getting ahead and always wanting more. Physical items are special and rare, but family time, prayer, laughter and music are all you have to get through. This is how John Primer was raised. Dreams of better days got him out of bed every day. The thought of someday playing his guitar on stage with Muddy Waters was his dream that pushed him to keep going. Missing his father (who passed away when he was only four years old) and wanting to be with his mother (who moved to Chicago when he was ten) and living in these oppressive conditions gave John his deep blues roots. The feelings from his up-bringing would not fully be understood until he got out of there, moved to Chicago with his mother and started playing blues music professionally. The full circle of his blues life was only then realized. The songs on this CD illustrate this emergence as well as give you John's self portrait, an auto biographical look into his life through his music. Staying true to his beginnings and sharing his life experiences has brought John a Grammy Nomination and a Blues Music Award as well as an ever-rising career in the blues world. When he got to Chicago John played with and learned from so many of the blues masters: Willie Dixon, Muddy Water's, Sammy Lawhorn, Junior Wells, Buddy Guy, Magic Slim, Pine-Top Perkins, Willie "Big Eyes" Smith, Honey Boy Edwards and so many more...John tries to keep their styles and legacies alive in his playing today. Blues On Solid Ground is John's 2nd CD from Blues House Productions. This intimate, 'down-home' style CD is John's first tribute to his early Mississippi life and showcases his powerful, soulful voice along with his masterful guitar style. The intent of the CD is to keep the blues traditions John grew up with alive and on solid ground, as well as exposing those traditions to the next generation. These 13 songs are all Primer originals, "I really don't try to change the blues I just try to keep it original. You do want to expand it, but you can't expand it too much", he says. Mixing John's traditional rhythm with all new lyrics keeps the blues up to date and relevant to it's roots. The intimate, 'in your kitchen' sound of John Primer's Blues On Solid Ground is alive and well. John's main message to all of us is: "Don't worry, the blues will be around for a long time and as long as he is around it's standing on solid ground!" - Lisa Becker Special thanks go to: my family for all their hard work on this CD. Thanks to Russ Green, Kenny Smith, E.G. McDaniel, Barrel House Chuck and to Brian and Blaise at Joy-Ride Studios for all your hard work. Thank you to all my dedicated fans (without you I would not be able to do what I love). I tried to come into your kitchen and sit down with you one-on-one, I truly hope you like it! - John Primer.

Here's what you say about
John Primer - Blues on Solid Ground.