Mark Donato - I Haven't Wasted All This Time Alone 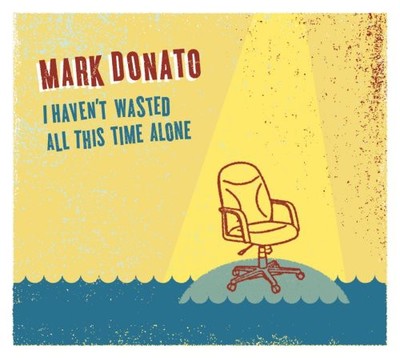 MARK DONATO: WHERE'S HE BEEN? Mark Donato lived his first 18 years in Connellsville, PA, graduated to Pittsburgh, saved $1000 and moved to New York City, where he inherited a band. He spent the late 1980s, the '90s and the early '00s bouncing around New York's underground music scene, and then headed Upstate to find a real garage where he could play his songs. He's performed his own material under his own name, with Canoeful of Strangers and with Spondee, a collaboration with Robin Goldwasser for the fabled Hello Recording Club. He's worked as a drummer, singer and harmonica player for John Linnell (of They Might Be Giants) & the Statesmen; the legendary country orchestra Flat Old World; Rosine; the Oswalds; and Amy Allison and the Maudlins. You should hear his songs. MARK DONATO: WHAT OTHERS HAVE SAID 'An unflinching yet sympathetic look at love, work, and memory, this wry singer-songwriter's appealing latest batch of songs, The Old Joy, is like an arm around your shoulder during hard times...delightfully droll country rock.' ? Richard Gehr, The Village Voice 'This is folk music in that you sense this singer/songwriter calls his parents 'my folks.' But it resembles rock and roll in it's scope, pop music in it's feel, and literature in it's character development...he sounds like someone genuine and gentle enough to be misplaced in our mad scramble for the latest world-weary glamour boys...Perhaps we don't deserve a CD this good. Let's hope I'm wrong. ' ? Hanh Tu Phuong, CUPS 'On the surface, (Donato's) debut engages because it's odd, ever-morphing textures, just like Harry Smith's anthology's, remind us that folk music was once remarkably strange...Beneath the surface, couplets like 'I dreamed my father told me I caused his heart attack / He said my life was empty and he deserved to have his back' remind us that his songs don't just sound interesting.' '...vocals that oft times evoke the phrasing of Holy Modal Rounder Steve Weber or the cracked sweetness of the Grateful Dead (Weir or Garcia I'm not sure), and there's the oddball lyrics that evoke the fractured short stories of Barthelme (Frederick or Donald I'm not sure)...' ? J. Salamon, The Village Voice 'Donato's debut is like listening to a set drawn from the most droll Bob Dylan, the humblest Elvis Costello, and the youngest Randy Newman.' ? Camden Joy, author of Boy Island, The Last Rock Star Book and Lost Joy 'One of the best songwriters around.' ? John Flansburgh of They Might Be Giants, in reference to M.D.

Here's what you say about
Mark Donato - I Haven't Wasted All This Time Alone.