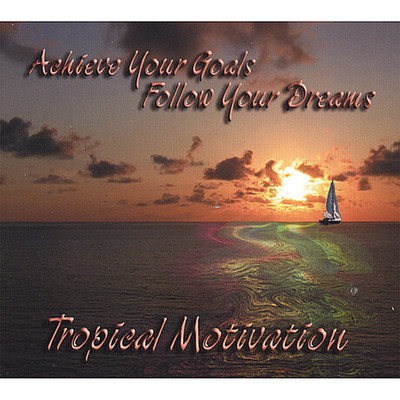 Tropical Motivation plays original 'Trop-Rock' 'Rockabean' music about Achieving Your Goals, Following Your Dreams and enjoying all the great things that life has to offer. This unique combination of Island, Rock and Jazz Music energizes and motivates those who have a vision for a wealth-filled lifestyle, draws a musical picture for all that is possible for those who are figuring it out and let's those who have achieved their vision of success savor the life that they have created for themselves. Perhaps never before in the world of art and business, spirituality and the law of attraction has there been a better example of these diverse concepts joining forces to create a project like Achieve Your Goals, Follow Your Dreams. From it's unlikely genesis, through the creative process, to finding just the right musicians to bring the music to life, Achieve Your Goals, Follow Your Dreams is a tribute to all that is possible in life. LEE ROMANO, PRODUCER Producer, Lee Romano's vision for ACHIEVE YOUR GOALS, FOLLOW YOUR DREAMS comes from his years as an entrepreneur, a musician with Lionel Hampton, (GRAMMY NOMINATION) Natalie Cole, The Shirelles, The Nelson Riddle Orchestra, Maureen McGovern, and others, and as a nationally known motivational speaker. He is a VOTING MEMBER of the National Association of Recording Arts and Sciences (THE GRAMMY AWARDS), a member of ASCAP, has performed on several albums, radio and television advertisements, has produced seven CDs and arranges and transcribes music for bands. He has presented Interactive Motivational Keynotes, Workshops, and Seminars to over 350,000 people around the United States. Lee believes that anything in life is possible if you dream it, work it and live it. Tropical Motivation™ The members of this All-Star Band have performed, toured or recorded with Bruce Hornsby, Edgar Winter, Brian Wilson, Aretha Franklin, Natalie Cole, Maynard Ferguson, Buddy Rich, Yanni, Lionel Hampton, Michael Andrew and Swingerhead, Hotel, The Hard Rock Live Band, Temptations, Four Tops, Joe Walsh, Rick Wakeman, and many others. You'll also hear the voices and instruments of the musicians on several Walt Disney Productions including the legendary Main Street Parade. Described as a musical version of Tony Robbins, ACHIEVE YOUR GOALS, FOLLOW YOUR DREAMS is simply the most energetic keynote you can have to close out your convention. It's musical motivation!

Here's what you say about
Tropical Motivation - Achieve Your Goals Follow Your Dreams.