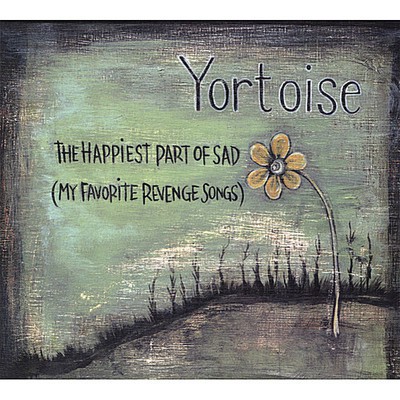 It's been seven years since Yortoise released 'I Love You to Death'. To some, seven years may seem like a long time, but for a band that owns and operates it's own recording studio and record label, time has a way of passing very quickly. Frontman, John Would, has been known to say that he's so busy with other projects that there's rarely time to work on his own band's record. Couple that with the fact that bass player, Jeff Silberman, made a transcontinental move from the band's native Los Angeles back to Philadelphia a few years ago, and it's a wonder that their latest release 'The Happiest Part of Sad (My Favorite Revenge Songs)' is seeing the light of day a mere seven years later. Has time been good to Yortoise? The short answer is a resounding "Yes." 'The Happiest Part of Sad...' combines the driving alternative leanings of 'I Love You to Death' with a kind of musical restraint that only taking one's time can bring. The results provide moments so gorgeous that it borders on unbelievable. Drummer Amy Wood is still the bands backbone playing as hard as ever on some tracks and laying back on others and is at times almost jazzy such as on 'Faster than Sleep', Jeff Silberman's bass playing holds the same quirky inventiveness that fans have come to expect, frontman John Would's lyrics are sardonically humorous as usual, and his style of playing is as mind-blowing as ever. But, there is a huge departure from the familiar sounds of Yortoise. The band has left room for many of the songs to breathe in a way that they haven't before. It is each member of the band's silences on this record that speak the most. Songs like opener "I'm in Low," "All My Friends," and "Who's Jennifer's Face" are all classic Yortoise at it's finest. However, on this outing Yortoise has expounded on their sound with songs like "The Smartest Stupidest Girl," which starts out with nothing more than a piano and vocals that sound as if they're coming at you from a dusty old phonograph. "Cousin of Sleep," a meditation on mortality and ultimately death, has a kind of unexpected ethereal lightness that serves the lyrics perfectly. "Banjo Shaker" is literally built around a banjo riff that provides sweet irony to Mr. Would's refrain "What really hurts, I'm in love with, what really hurts." 'The Happiest Part of Sad...' culminates with "Toothache," a melding of the old and new Yortoise that leaves the listener wanting nothing more than just one more track to savor before the journey is over, but as the last few notes fade, there is an overwhelming urge to start the record over again and mine it for every bit of gold buried beneath the surface...and then it hits you, your journey with this record has only begun. Yortoise is a band that has worked and played together for many years. One hesitates to say that they've reached their pinnacle; perhaps it's just that for the next several years we'll be left to revel in the fruits of the last Seven. 'The wait is over and it's been well worth it.' -Courtney Fairchild.

Here's what you say about
Yortoise - Happiest Part of Sad (My Favorite Revenge Songs).