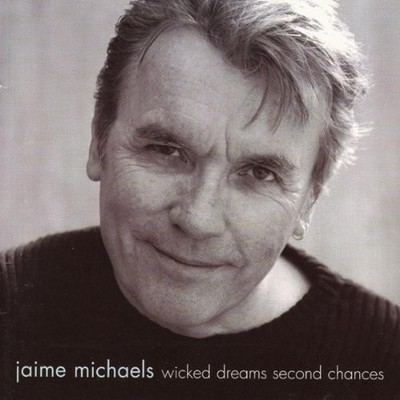 Close on the heels of 2002's critically acclaimed 'angelus', this newest release from Jaime Michaels is as always lyrically right on the money and musically straight from the heart. Produced by Jono Manson, 'wicked dreams second chances' features outstanding performances from the Santa Fe, NM musical family including Sara K, percussionist Mark Clark (Ottmar Leibert) and multi instumentalist John Egenes (Eliza Gilkyson, Bill & Bonnie Hearne). This new collection of originals finds Jaime once more exploring the stylistic map. Highlight tracks include 'maybe next year', a beautiful waltz co-written with Texas songwriterwriter Jeff Talmadge; a haunting solo acoustic reading of 'i am only (what i am), the story of a local philosopher who wanders the streets of late night Santa Fe enthusiastically chatting with the paintings in the gallery windows. The moods range from the peace anthem 'here in my home' to a lap steel driven version of Canadian Murray McLauchlan's ode to a wino, 'honky red'. Other outstanding tracks include a guitar-piano rendition of Jaime's beautiful ballad 'writing songs on the moon' and the moving 'nobody's kid', written following the death of his father. Jaime Michaels Biography Jaime sings. He always has. Always wanted to. Except maybe when he was in the fourth grade and Sister Mary Eymard used to traipse him and his two brothers around St. Mary's and force them to harmonize to Maguire Sisters tunes. Fortunately not too long after that he discovered what was going on up the road from the old Rhode Island homestead. And from the first act he ever saw at the Newport Folk Festival, a very young Tom Paxton, he knew what he wanted to do. That. And damned if that's not what he wound up doing. Well, more like this and that . . . a few years of sincere sixties singer songwriting in Cambridge trying to steal some of Tom Rush's tunings and Bonnie Raitt's rasp, opening shows with his then partner, the late Jesse Brown, for Dave van Ronk, Doc Watson, John Hammond and Jesse Colin Young . . . a couple of more solo years worshipping at the alter the Saints Tim, Buckley and Hardin . . . a fondly remembered stint as bass player/guitarist for the acoustic trio Beckett, touring and opening shows for Livingston Taylor, Jonathan Edwards and Earl Scruggs. Following time spent in Vermont teamed with guitarist Ron Renninger and saxophonist Leon Future in the band Favorite Cousins, Jaime left New England in 1980 for the shores of South Carolina. What followed was at least a lifetime and a half touring the deep South as lead singer for the Truly Dangerous Swamp Band, learning how to drive a truck while sleeping . . . actually, the tour lasted for a pretty constant 8 ½ years . . . The Swamp Band was out there rocking college campuses and clubs from Oxford, Mississippi to New York City, Princeton to Key West, opening shows for Little Feat, Bonnie Raitt, Delbert McClinton, Poco, Roseanne Cash and Vince Gill among others . . . and all the time Jaime's been gathering up the pieces of his particular musical puzzle . . . Living now in Santa Fe, New Mexico and back on the solo acoustic circuit for the past eight years, Jaime has just released his fourth solo album titled wicked dreams second chances, joining the previously released a quiet heart (1994) and the critically acclaimed little dreams (1999) and angelus (2002)). This newest album was once again produced by fellow Santa Fe (via NYC) writer/musician Jono Manson at his MedioMedia Studios. Meanwhile, what Jaime likes to call his 'Obviously Signed Up For Life' tour continues as it has for so long with festival, club and house concert appearances in 25 states, Canada and the Caribbean including his most recent appearance as a NEW FOLK FINALIST at the 2003 Kerrville Folk Festival. He embarks in early September, 2003, on a 7 week cross country tour that will take him to the Northeast and Southeast US. January, 2004, will find Jaime & Jono touring together in Italy. And in March of 2004, Jaime will be touring the West coast of the US. Jaime Michaels Reviews '...(Michaels) melts into his music rich instrumentations, influences from all of the last century and creates with 'angelus' music that could very well suit teenagers as well as adults. Although the term has been over used, this is truly 'new folk'...Michaels is expanding the limits of the genre and is surely an artist to follow.' Moshe Benarroch - FAME review of 'angelus' 5/02 'Equal parts wit and wisdom . . . 'little dreams' celebrates little things in a big way.' Performing Songwriter Magazine '. . . Jaime Michaels' use of language is uncommonly exquisite. His songs and writing have the hand rubbed luster of universally personal feelings. When they touch you, you feel as if you've held them before, then you wonder if you really have.' Fran Grey - Two Louies Magazine '. . . each of the albums cuts sparkle like precious gems in the nighttime desert sky. . . a masterful understatement from a singer-songwriter who knows the value of space and subtle shadings.' taylorguitars.com '. . . subtle yet powerful in it's bare honesty. . . enigmatic lyrics and arrangement much like Daniel Lanois. . . The genius of this album lies in it's simpleness.' mish-mash CD reviews '...masterful...laden with beautiful thought-provoking lyrics. If you're a fan of John Prine, you'll become a fan of Jaime Michaels' lee county courier 2003 Kerrville New Folk Finalist 2003 2nd place Founders Title Folk Festival Songwriters Showcase 2002 Finalist Founders Title Folk Festival Songwriters Showcase 2001 Winner Tucson Folk Festival Songwriting Contest.