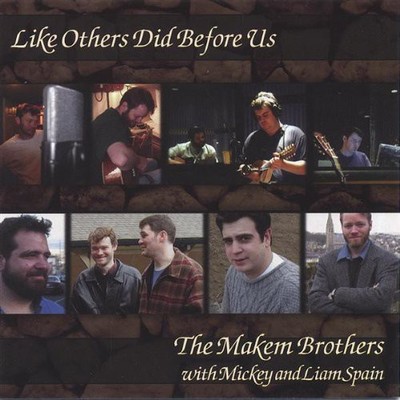 Every generation has a few acts that define where a musical genre is going, performers so confident in their chosen field that they are able to completely embrace the genre and yet introduce something new to it. In Irish folk music today, that act is the Makem and Spain Brothers. Not in the past 30 years has a group taken the international stage with such vocal power and stage presence, capturing the essence of their genre, while standing out as something truly unique. A host of various instruments and five male vocals, using precise three-part harmonies blend perfectly for what many have described as a wall of sound. The Makem and Spain Brothers are at their best onstage where their talent and enthusiasm draw in fans who have never experienced the joy of folk music. The band of brothers who were once considered the new kids on the block, have honed their craft over 15 years of international performances and are now one of the truly stalwart, road-tested Irish vocal groups available. They have played before millions of people from Canada to Texas, from California to the Caribbean and over to Ireland, highlighting national PBS specials and popular Irish talk shows along the way. The Makem Brothers, Shane, Conor and Rory, were born in Drogheda, County Louth, about an hour north of Dublin. They continue the lineage of one of Irish music's dynasties, begun by their grandmother Sarah Makem, who was sought after by song collectors for her store of traditional Irish songs. Their father is Tommy Makem, the modern day Bard of Armagh. Now considered an icon, he helped to bring Irish music out of the corner and into the international spotlight, where it has remained ever since. The Spain Brothers, too, learned Irish songs at their father's knee. Mickey's rich, baritone voice and Liam's mastery of stringed instruments quickly found a home when the Makems met the Spains and the brothers realized the power of their combined talents. But folk songs are engrained in both families and their songwriting contains the timeless qualities of folk classics, songs of the worker, songs of the sea and Irish culture. They tell the tale of Ireland and it's people - a culture that has undergone terrible strife, but remains strong. Where is Irish music going? There are instrumental bands bringing it down uncharted roads, moving it forward and keeping it living. But there is only one band that is driving Irish folk songs into the 21st century internationally. That band is the Makem and Spain Brothers.

Here's what you say about
The Makem Brothers - Like Others Did Before Us.