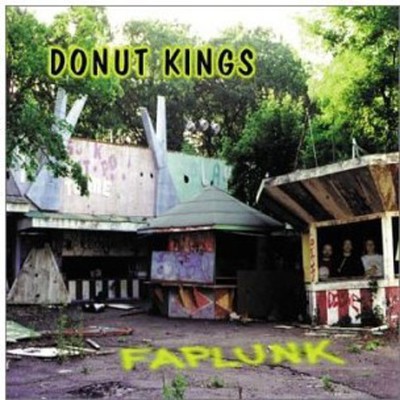 Artist description Donut Kings are a fun loving 3 piece rock n roll band. Some songs are silly, others are funny, some are even deadly serious, yes a few are about girls, even more about cars, lots of food stuff too. The Donut Kings enjoy playing, you'll enjoy listening. Music Style Fun Rock Musical Influences All music styles, inc. Alt., punk, hard rock, funk Similar Artists Green Day, Ramones, Chili Peppers, Primus, B-52's Artist History Formed in 1986 by Crowell, Desgres, and then guitarist Pat Butler. The Donut Kings released 'First Bite' in 1986, and 'Bizmark' in 1987 with Rick Duquette on guitar. In 1989 'School Food' was issued with yet another (three to be exact) guitar player(s). Johnny Studid AKA John Omer was the new permanent (about a year) guitar player. Daxe Rexford of Pajama Slave Dancer fame, and Kenny Tex helped on the sessions. Then came Bob Haberern. For some reason he joined the Donut Kings in 1991 on guitar, and is still here. Finally in 1996 'No Evacuation Possible' was issued on CD with an Enhanced format. The new CD FAPLUNK is now out. Check it out!!!

Here's what you say about
Donut Kings - Faplunk.