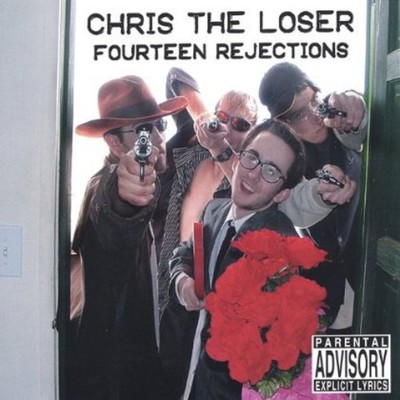 The winning 'loser' Chris Barnes fuels his dateless persona into punkish fire Eighteen-year-old Chris Barnes seems to be a cross between a young Elvis Costello and something not so easy to put your finger on. There is a self-deprecating cockiness as he speaks in a tongue-and-cheek manner, perhaps showing off his intellect, possibly illustrating his constant need to perform. He loves his stage name, 'Chris the Loser.' (aka CTL) Barnes claims the album title comes from the number of times girls have turned him down for dates. One can never be sure when he is serious or sarcastic but the record is filled with songs of lost love and adolescent happenings. Barnes wrote all the songs for his CD over the past four years. The lyrics provide interesting and sometimes humorous insight into an intense young mind. Many of the song titles are not fit for print and the entire project is wrought with explicit lyrics brimming with teenage angst. Still, Barnes is a talent and has the charisma and attitude to match. Chris the Loser was born in the '80's and grew up listening to his parent's vinyl. As a result, he said music from that era 'is imbedded in my brain. 'Although you can hear the influence of groups like The Cars, King Crimson and David Bowie, he has added the element of his own creativity, which is substantial to form his own genre of music. -Brandt Legg THE TAOS NEWS 2004 I have known Chris all his life and I'm very proud of the fact that he has turned into such a fine singer songwriter, in the tradition of Elvis Costello. As for his first release, I have noticed that his CD's seem to fly off my producer's desk whenever people drop by the studio. Everyone's always asking what he's up to next. His next move is to Dallas where, we are going to put our heads together and come up with a better sophomore CD effort than would be expected from any rising star. -James Neel, James Neel Music House Dallas. Chris' daddy, Roscoe West is also a musician. He played with Kinky Friedman and the Texas Jew Boys, Bob Dylan's rolling Thunder Review, Delbert McClinton and T-Bone Burnett. After spreading his seed he tought young Chris the ways of the talented yet starving artist. Born in Dallas, Texas- Chris was raised in Northern New Mexico where he was beaten up daily and eventually home-schooled. He studied voice, music, art and karate. He took his GED at 16 and attended University of New Mexico in Taos. He studied music, art, theatre, film and a hint of English. Friends Max Moulton, Danny Montoya, and Kevyn Gilbert also played on the CD, produced by John Carey and engineered by Omar Rane at the Tone Palace in Taos. This amazing first effort will surely be a collector's item as the career of this bright young man continues.

Here's what you say about
Chris the Loser - 14 Rejections.