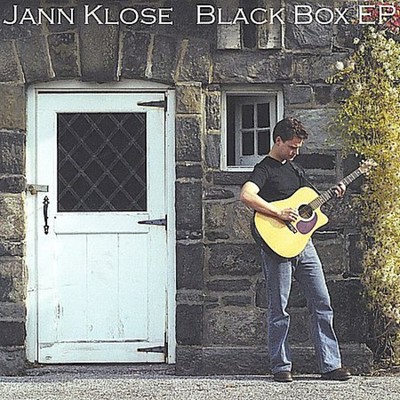 'This is one of the best demos anyone has ever sent me! He totally has the sound, the playing and writing skills - Wow! I am a total fan!' Ken Dashow, Q104.3, New York City 'A startlingly fresh blend of pop, blues, rock and jazz ... a powerful voice merged with veteran songwriter sensibilities.' Jim Vickers, Cleveland Magazine 'Soulful and exciting!' Marcia Siegel, Boston Phoenix 'A superb new EP of lush orchestral pop and jazz-inflected acoustic ballads. Klose's voice is pliant and powerful - this disc is a real find!' Jason Bracelin, Scene Magazine Jann Klose's current Studio EP BLACK BOX, has been called "by far the best unsigned record I have heard in a long time" by Kid Kelly of Sirius Satellite Radio. The CD has certainly been a key ingredient - along with an active desire to perform for people all over the globe - in building Jann's career. The songs BLACK BOX and IT'S NOT THE WAY have been licensed to film (Warner Bros. DVD "Dead Broke", starring Paul Sorvino, Jill Hennessy) and overseas radio markets (Prambors Hits 3, Indonesia). A live video of WALK THROUGH THE RIVER has received over 100.000 downloads in file-sharing networks online and been seen on "Swept Away TV" in 60 U.S. markets. In addition, the EP was a favorite at regional college and adult alternative radio. A citizen of the world, Jann Klose has lived on three continents, making his home in the melting pot that is New York City. Before coming to the United States as an exchange student in Cleveland, Ohio, he lived in Germany, Kenya, and South Africa. As a singer and songwriter, his music reflects this lyrically, melodically, rhythmically and in his choice of eclectic instruments and musicians. It also shows in the people who choose to work with him. During the course of his career, Jann has worked live or in the studio with artists ranging from Brett Dennen, Suzanne Vega, Rusted Root, Vonda Shepard, Rosanne Cash, Roger McGuinn, Renaissance and Annie Haslam, Jim (The Yardbirds) McCarty, Gary Lucas to the legendary Les Paul and plays an average of 75-100 shows per year.

Here's what you say about
Jann Klose - Black Box EP.