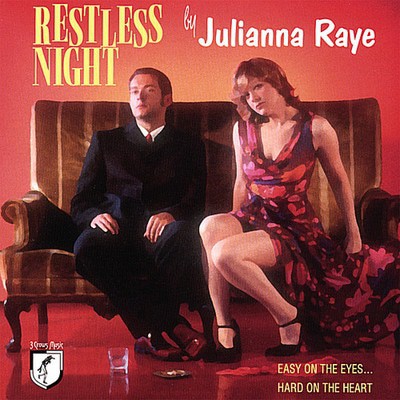 THREE CROWS MUSIC Artist Biography Julianna Raye Julianna Raye's second solo effort, Restless Night, captures one of those rare, defining moments in the ever-capricious chronicle of popular music. After an abscence of nearly a decade since her critically acclaimed, major-label debut effort, Raye has re-emerged with an extraordinary independent release. She and producer Ethan Johns have crafted an enticing foray into the wearisome search for love amidst the creeping vapors of Los Angeles nightlife. And what a response Restless Night has received! In true indie fashion, Raye and Johns put together a website, pressed up cds and sent out some packages. Before long, Entertainment Weekly, Billboard and NPR had picked up on the CD with glowing reviews which led to national distribution. Next came the official thumbs up from harbinger of cool, KCRW's Nic Harcourt on Morning Becomes Eclectic and a full page article in the L.A. Weekly. At the same time, the legendary Don Henley was so impressed by what he heard he invited Julianna to open for him on a string of dates, proving that quality transcends terms like independent or mainstream. In the past year Julianna opened for Don Henley and Stevie Nicks and toured Europe as a member of Rufus Wainwright's band. The year culminated in a publishing deal with Chrysalis Music Group. These are the kinds of opportunities major label acts are fighting for. It's a testament to the passion people feel for the music and to the heart that went into making it. Recorded entirely at Johns' L.A. pad, Restless Night is an amalgam of ethereal soundscapes that should - by all rights - become the new standard in ultra-chic. Raye's torrid exploration of jazz, swing and blues, combined with Johns' trippy drum loops and quirky instrumentation, is evocative of 1930's Shanghai Nightclubs, Bladerunner, and all the empty space and time in between. Despite the celestial vibe, Restless Night is strikingly intimate and revealing. 'I've loosened up a lot over the years' says Raye. 'Growing up has it's advantages. I think my songs are more sensual now and they hit you on a deeper level. I'm more comfortable in my own skin and I think it shows.' New York born and east coast raised, Raye grew up with a creative talent that sought every opportunity for expression. Her early years included singing lessons and theater, but for a daughter of two family therapists, an arts career was simply not considered a viable option. Raye attended Duke University as a psych major because, she recalls, 'it seemed like the responsible thing to do.' But when she attended a summer theater workshop, 'I felt like I was breathing again,' continues Raye. 'It was then I realized where my passion lay and I wanted to pursue it at all cost.' Julianna relocated to Los Angeles and it wasn't long before she got a break guest-starring on an ABC series. Just a few short months later, she signed on as a solo artist with Warner Brothers. To hear her tell it, 'I thought I would be an actress. That was my original goal, although my dad said I should be a singer right from the start. I remember thinking he was nuts.' Nonetheless, Raye's voice had caught the ears of Jeff Lynne, who offered to produce her debut effort. Something Peculiar was released in 1993 and was met with substantial acclaim. Since that time, Raye has performed throughout the country and her songs have been featured in many films and television shows. Among those most notably, she performs a song she co-wrote with composer Michael Kamen on the end credits to the Kevin Costner film Open Range Starring Kevin, Robert Duvall and Annette Bening. Two of her songs will also be featured in the upcoming Rod Lurie film, Resurrecting the Champ, starring Josh Hartnett and Samuel Jackson, for which she co-wrote the songs with the director himself. She has shared writing credits with a number of contemporaries including Rufus Wainwright, Ryan Adams, Michael Kamen and Ross Godfrey. Julianna has also sung on several releases by Rufus Wainwright as well as Johns produced Ryan Adams Cds, Gold, Demolition and 48 Hours. Regarding Johns' as producer on Restless Night, Raye says 'I knew beyond a shadow of a doubt that Ethan was a guy I could trust to bring my tunes to life. I knew he was comfortable wearing many hats, from producing to playing to engineering.' Ultimately, Johns' production expertise and Raye's smoldering voice have come together to fashion a singular artistic vision; one that is traditional yet experimental, timeless yet contemporary. 'A friend of mine described this as a great record to make out to,' says Raye. 'I love that take on it, but the songs also deal with some pretty scary stuff - romantic love and loss... The blues. The trick is to find the light in the dark and the dark in the light. If I had to sum it up, I would say that this is a record for people who like to lie back and dream... and for people who aren't afraid of the dark.'

Here's what you say about
Julianna Raye - Restless Night.