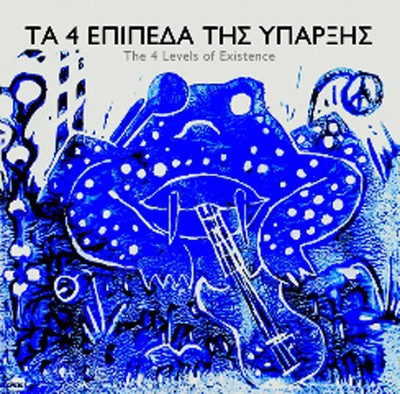 Slightly revamped second edition of an album that many people consider to be the best Greek psychedelic album ever recorded, a belief that would mean that the Four Levels of Existence LP would supercede albums by artists like Axis, Aphrodite's Child, Socrates, and George Romanos. We'll let you decide the argument, for there is no doubt of one thing-that this is tremendous hard edged psychedelic rock, originally released on LP in a very small quantity by the private Venus label in 1976. As band leader Athanasios Alatas said: "Through Nick's musical quest, Mario's sensitivity, Christos' madness, and my thoughts, we create many songs, all characterized by a psychedelic music sound, Greek lyrics, and monumental guitar solos." Since the appearance of our first edition of this album on CD, the excellence of the band has not gone unnoticed.* (see below) This carefully documented reissue contains the entire Four Levels of Existence LP, the only recordings they ever made. A twenty-four page booklet includes historical background on the Greek music scene of the early 1970's, details of the band's past written by Alatas, rare photos of the group, as well as lyrics in both Greek and English. This second CD edition is strictly limited to 1,000 copies. Printed on FSC recycled, chlorine-free, 100% post-consumer fiber paper manufactured using biogas energy.