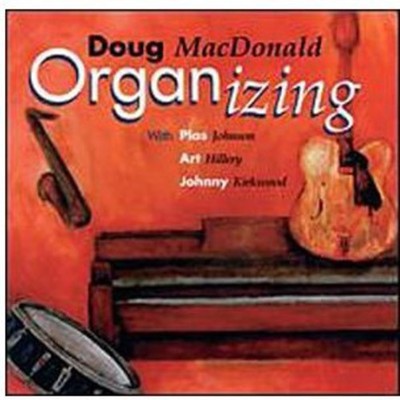 Doug MacDonald is an unpretentious guitarist whose foreground and background playing deliver equal doses of 'beautiful, bell-clear sounds and a sure-footed sense of swing' (Zan Stewart, jazz journalist). That's the nutshell version from a writer known for his economical way of saying a lot. In his eighth recording, TURN, on Sea Breeze Jazz, MacDonald focuses on his composing/arranging skills and introduces non-traditional instrumentation in the form of a 13-piece ensemble, 'The Jazz Winds/Brass Coalition,' to showcase his and other writers' music. This bigger-band work was the next natural step for the veteran player's growth, culminating years of composition studies about which he has become increasingly passionate. In his own liner notes, he refers to the CD repertoire as an effort to 'create a body of work that explores a wide spectrum of colors and forms,' explaining that 'while there exists jazz swing on certain tracks, other pieces travel from tonal to atonal sections with Latin and/or eighth note rhythms-an adventure where the listener will discover new 'turns' of musical form and expression,' thus the title tune. Jazz journalist Jim Santella, in reviewing the CD, calls the title tune 'a journey through Jazz's history and toward it's future development,' adding: 'Without growth, anything would become commonplace and ordinary. Doug ensures that jazz has a place to turn to that allows for change without sacrificing tradition.' Likewise, critic/columnist Harvey Barkan says that MacDonald 'has opened a new window for fresh ideas with an irresistible effervescent feel of swing.' Previous to the 13-piece band, MacDonald fronted and recorded a nine-piece brass and rhythm assembly of several of the same members of this new group. Called Warm Valley (Resurgent Music RM111), it featured arrangements by trumpeter Buddy Childers, Lou Forestieri and Jimmie Dykes, who shares the composing/arranging spotlight with MacDonald on 'Turn.' And so it has gone over the years. Increasing the numbers in his performance groups and augmenting the instrumentation and sounds have become the trademark MacDonald way of climbing the jazz ladder- from soloist to trio leader to writer and front man on today's impressive non-traditional combo of masterful players, a jazz/classical hybrid big band that swings. A longtime Los Angeles-based guitarist, MacDonald was born in Philadelphia and raised in Honolulu. He left the island paradise for the mainland's music opportunities in 1982, creating a 'portable' career for himself mostly on the West Coast, but also in New York and occasionally Las Vegas. He has been 'flexible,' he says, accounting for a steady schedule of what often evades even the most talented and/or seasoned player, especially in jazz circles-work! Splitting his time between the Big Apple and the Big Orange netted him critical recognition from both sides of the map. '...mighty impressed with the warmly coaxing artistry and good, enthusiastic work habits of Doug MacDonald, who...has made his presence felt at various Gotham jazzspots...' (CMJ New Music Report, reviewing Quartet on Cexton Records, and calling it 'a mainstream must.' 'a complete jazz guitarist who, judging from this exciting outing (****Quartet) should make quite a splash on the East Coast. ...a rich, yet clean tone, a penchant for mixing single-note lines with octaves and deep, second-line chords and a fresh conception.' (Sunday Star-Ledger) 'In recent years, Doug MacDonald has become one of the most respected-and busiest-guitarists in Southern California. ...at his best in a straight-ahead jazz context...a lyrical guitarist who plays in a relaxed, easy swinging manner...also can burn...(Orange County Register) And the Los Angeles Times comment which has become historical since MacDonald's solid replanting of his roots in L.A., 'We don't see as much of one-time L.A. resident Doug MacDonald now that he's moved to New York. That's why the guitarist's second release from Cexton Records is so welcome.' (Re Quartet with Ross Tompkins, Ray Brown, Jake Hannah) As a sideman on both coasts and some stops elsewhere, his live performances are in the hundreds, with: Stan Getz, George Shearing, Joe Williams, Sarah Vaughan, Ray Brown, Buddy Rich, Dave McKenna, Scott Hamilton, Richard Groove Holmes, Jack McDuff, Bobby Vinton, Ray Charles and Rosemary Clooney, plus fellow guitarists Joe Pass and Herb Ellis. He has recorded with Hank Jones, Jack Sheldon, Bob Cooper, Snooky Young, Bill Holman, the Clayton/Hamilton Jazz Orchestra, Lorez Alexandria and Ray Anthony, among others. The MacDonald led sessions include: Doug MacDonald Quartet with Ray Brown, Jake Hanna and Ross Tompkins (1990), Organizing, with tenor saxophonist Plas Johnson, drummer Johnny Kirkwood and Art Hillary on the organ (1997), and the aforementioned Warm Valley (1996). Two earlier works on Sharp Eleven Records were titled New York Session and I've Got the Minor Blues. Referred to as a bop-based guitarist in the tradition of Pass, Ellis and Barney Kessel, MacDonald admits to admiring 'all those guys, the way they played and what they played,' completing the list of major influences by naming Wes Montgomery, Johnny Smith, Grant Green and Jim Hall. MacDonald's own name may well find it's way to the 'influential' list for future young musicians, given his persistent pursuit of always improving the music, always seeking new ways to present jazz and constantly honing his considerable skills. Again, from the master of understatement, Zan Stewart, comes a simple summary description of the guitarist as he likens him to Johnny Smith and West Montgomery, 'who in the 1950s and '60s placed their dulcet, rich tones and smooth rhythmic styles in front of orchestras to great effect.' 'Guitarist Doug MacDonald takes the same sort of listener-friendly approach.' He is, Stewart says, 'subtle but never dull.' ### For more information and a complete profile, contact: Marty Morgan, Public Relations. (818) 997-6612; [email protected] Home ^ Profile ^ Discography ^ Press ^ Schedule ^ Reviews ^ Links ^ Contact Website Design by Jazz at Chardonnay, 831-786-8845 Last Update: 08-Jun-2006.

Here's what you say about
Doug Macdonald - Organizing.