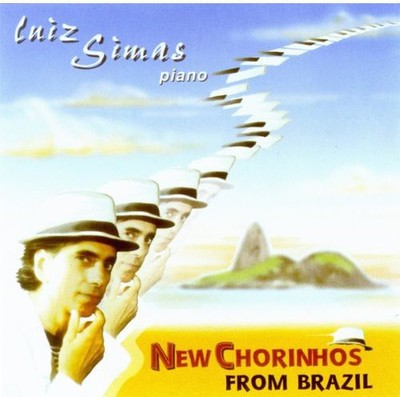 Luiz Simas was born in Rio de Janeiro, Brazil. He is a composer, singer and pianist, and he has performed and recorded with several well known Brazilian artists. Many of his songs have been recorded in both Brazil and the USA. Living in New York since 1989, he has performed as a solo singer/pianist, as well as with his own group and with several Brazilian and American groups, in many different places such as the Brooklyn Conservatory, the Greenwich House Music School, Rutgers University, SOB's, the Village Gate, The Spanish Institute, Cafe Wha, The Ballroom, Hotel Plaza Athenée, The Polish Consulate, the Roger Williams University (in Bristol, Rhode Island), the Mirage Hotel (in Las Vegas), at the Rocky Mountain Ragtime Festival (in Boulder, Colorado) and also in Jamaica, the British Virgin Islands and Trinidad in the West Indies. Luiz's style is influenced by classical music, jazz and bossa nova, and by Brazilian popular, traditional and modern music. His repertoire includes his 'chorinhos' and other compositions for solo piano. The chorinho genre has some similarities with ragtime, and at the Rocky Mountain Ragtime Festival Luiz (announced as a 'sensational pianist from Brazil') was featured as a great example of the close relationship between the all styles of piano music of the Americas. On November 2000 Luiz performed at the II International Chopin and Friends Festival at the Polish Consulate in Manhattan playing his original compositions in the chorinho style. Many of his pieces have been chosen by the Central New Jersey Piano Teachers Forum, an association of 100 piano teachers, to be included in their syllabus for 2002. WHAT THE CRITICS HAVE BEEN SAYING ABOUT LUIZ'S CD 'NEW CHORINHOS FROM BRAZIL' '(Luiz's) playing is sassy, clear, vibrant, yet understated, (and) his music ...sounds fresh, smart, and witty' - Titus Levis, Keyboard Magazine '(His CD 'New Chorinhos from Brazil) is by far the very best choro release out of Brazil in recent years. All titles .. composed and superbly performed by Luiz Simas on piano'.- Egídio Leitão, Luna Kafé '.. A great meld of classical with modern that creates a fantastic sound'. - The Critical Review Luiz Simas can be contacted at: [email protected] Visit Luiz Simas's website at.

Here's what you say about
Luiz Paulo Simas - New Chorinhos from Brazil.