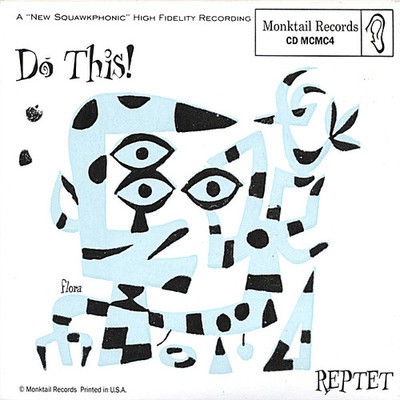 Reptet plays jazz music informed by a post modern sensibility. They deal in dichotomy. Rooted in the spirit and language of jazz they reject it's often times rigid traditionalism and codified expectations. They are a sextet consisting of six multi-instrumentalists that play original compositions written by band members. The audible palate from which they draw is broad and colorful. They have established themselves as a group of considerable excitement, talent and vision while simultaneously debunking preconceived notions of what a "jazz group" ought to be. Their music has been aired on radio stations across the North America and Europe and their members have toured internationally. With the release of their second CD "Do This!" on Monkatil Records, they have established themselves as an irrepressible force in modern jazz. Tobi Stone has studied with such jazz greats as Don Lanphere, Michael Brockman, and Bert Wilson. In, 2000, she graduated with a Bachelors of Music in Jazz Studies from the University of Washington. She has performed with jazz luminaries Dave Brubeck and Mimi Fox among others. She is also a member of the Tiptons, an all women ensemble with four saxophones and percussion formerly known as The Billy Tipton Memorial Quartet. Samantha Boshnack (trumpet): A graduate of Bard College in New York. Studied with Erica Lindsay, Thurman Barker, Jerry Sabatini and Baikida Carroll. Recipient of the Nesuhi Ertegun award in jazz, the Larry McLeod award in jazz, and the Liberace scholarship. Ben O'Shea (trombone): Ben O'Shea holds degrees in music from from the University of Arizona and Central Washington University. He has performed in a number of ensembles with artists that include Jimmy Heath, Conrad Herwig, and Linda Rondstadt among others. Ben feels very fortunate to have studied with Bill Anthony, Tom Ervin, Mark Babbitt, Jeff Haskell, and Chris Bruya. He can be found playing with other groups Picoso and Red Eye Flight. Izaak Mills (sax): While growing up in Olympia he studies flute with Nancy Curtis and reeds with Bert Wilson. He attended Cornish College of the Art in Seattle from 1998 to 2000 learning with Hadley Caliman, Dave Peck, and Paul Taub. Ben Verdier (bass): Ben is a Boston Native. He has studied jazz and classical double bass with Doug Miller and Barry Liebermn. He received his Bachelor's degree in music from Stanford University and is well versed in a variety of styles. John Ewing (drums): A native of Philadelphia, PA. He studied with Robert Brosh and John Bishop. He has performed with legendary jazz trombonist Julian Priester and saxophonist Bert Wilson. John is Reptet's founding member and leader.

Here's what you say about
Reptet - Do This!.

Album
Do This!
Main Format
CD
Keyword Index
Do This! | Reptet