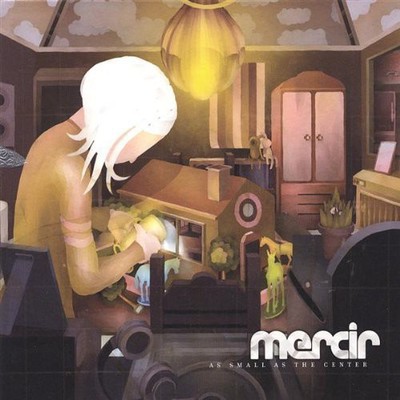 Somewhere between innovative artists such as Björk and The Postal Service, and the satisfying song work of acts like Doves or Depeche Mode, lies Mercir (mer'-ser), the Seattle-based quartet armed with acoustic guitars, cellos, synthesizers, turntables and samplers. Songs range from creaking acoustic ballads to soaring cinematic pieces. Tablet Magazine describes, "It's all of the techno-perfection of the new-school Radiohead with very little of the postmodern alienation." As Small As the Center, Mercir's first release (self-released, September 2004), deals with the undulating nature of life, the humility and insecurity of what it means to live in a fast-paced, overly stimulating, self-conscious world. Mercir approached their goal of marrying soulful melodies with organic and electronic soundscapes to create something evocative, heartfelt and original. The album, written and produced by the band in their own home studio, offered a clean, meticulously crafted work for their freshman effort, which took the attention of the Seattle Post-Intelligencer: "As Small as the Center' was recorded in a home studio, and yet it sounds as sleek and glossy as a full studio production. That is not an insult. For an electronic hybrid band like Mercir, it's essential." Performing in the Northwest for over seven years, vocalist and guitarist Zadok cut his teeth in rock/hip-hop acts, opening for a diverse range of national acts from the Black Eyed Peas and Eminem to Pedro the Lion. Turntablist and samples specialist Colin Johnson, a Los Angeles native, performed alongside influential DJ's: Armand Van Helden, Simply Jeff, and Jason Bentley. Johnson also produced original tracks featured on MTV's Road Rules, CBS' Touched By An Angel, and played on KCRW's Morning Becomes Eclectic. Keyboardist Joel Eby came up through a different scene, turning knobs on analog synthesizers since grade school, eventually producing works for commercial projects, most recently Final Fantasy and Nintendo's Zelda (for which he garnered a Webby Award for Best Use of Sound or Music in 2005). Recent addition Neal Vickers brings a frenetic energy to the band, adding bass, electric guitar, and cello to the mix. Mercir's songs have been featured nationally on NPR's All Songs Considered and Fresh Air, as well MTV's Real World and Laguna Beach. Other honors: Mercir was selected as a recipient of Redhook's 2004 Emerging Music Award; and has performed at NXNE, Portland's Music Fest NW, and Seattle's Bumbershoot. Mercir's sophomore album, Windchimes & Landmines.

Here's what you say about
Mercir - Windchimes & Landmines.