Deborah Liv Johnson - Cowboys of Baja Have Stolen My Heart 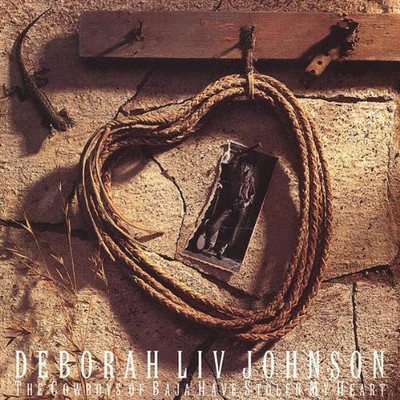 NO MORE ART AVAILABLE. DISK ONLY. 'It is not surprising that Johnson's luxuriant alto is the album's most affecting instrument...take Johnson's tackling of the standard, Georgia on My Mind. The result is a presence, a spatiality, a soulful, elegant simplicity that is unique among the hundreds of renditions extant.' --The Los Angeles Times Deborah Liv Johnson was the third of five children, born to missionary parents in Tanzania, East Africa. Returning to the United States before her first birthday, Johnson was raised in the desert community of Ridgecrest, California. Her first love of music was drumming. Johnson attended St. Olaf College in Northfield, Minnesota, known to have 'the best college choir in the world.' She did not, however, follow the straight and choral path. Instead, she lettered in track and developed a presence as a singer/songwriter with stints at the campus coffeehouse and downtown clubs. Graduating with a degree in creative writing, Johnson moved to San Diego to continue her music career. Image-rich lyrics and well-crafted melodies became her trademark. Often flying solo, Johnson's performances showcase the eclectic nature of her songwriting, highlighting deft guitar work and vocals, as she moves easily between blues, ballads, folk, country and jazz standards. Johnson has released eight CDs on her own Mojave Sun Records label: Mahogany Whispers, The Cowboys of Baja Have Stolen My Heart, Across the White Plains, Softly and Tenderly, A Mountain We Will Climb (a CD single written for breast cancer survivor Laura Evans), Away in a Manger (Christmas), Real Women, Real Beauty (another fundraiser for breast cancer in conjunction with TheRealWomenProject.com) and Johnson's newest release, The Good and Bad of It. The Cowboys of Baja garnered Mark Gallo's choice for Best Local Album in San Diego and the following year, Colorado Public Radio listeners chose Johnson as Best New Artist. Even with the success of Across the White Plains, much to Johnson's surprise, Softly and Tenderly, a collection of sparsely produced hymns, is outselling all of her releases. Over the years, Johnson has opened concerts for various name artists such as Dan Fogelberg, Don McLean, Spyro Gyra, Suzanne Vega, Arlo Guthrie, Nils Lofgren, John Stewart, Tom Chapin, Rita Coolidge and Janis Ian. She's toured across the country and sung the national anthem for Hillary Clinton.

Here's what you say about
Deborah Liv Johnson - Cowboys of Baja Have Stolen My Heart.