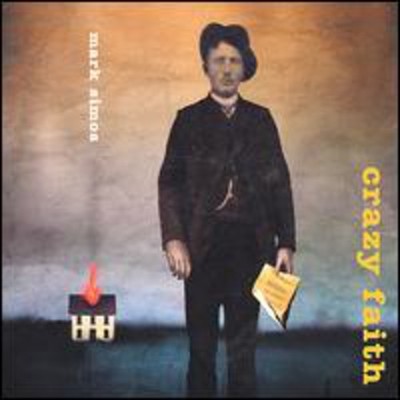 Songwriter, tunesmith, old time fiddler and Celtic accompanist Mark Simos has been one of the traditional music scene's best-kept secrets--until now. Mark is probably most widely known for his four songs to date recorded by Americana supergroup Alison Krauss and Union Station (two from this album while still unreleased). 'Crazy Faith' is the long-anticipated album featuring Mark's own renditions of a selection of his songs, a song cycle exploring 'the work of love.' Produced by master old time fiddler Bruce Molsky, the album's distinctive sound is built around Mark's crystalline guitar playing, backed by an ensemble of some great players from the world of old time, bluegrass, and progressive acoustic music. 'Crazy Faith' shows why Mark's songs have been covered by progressive acoustic artists such as AKUS, Laurie Lewis and Tom Rozum, the Del McCoury Band, the Wayfaring Strangers and many others. Produced by Bruce Molsky. Mark Simos, on vocals, guitar and fiddle, with: Brian Melick, Bruce Molsky, Tom Rozum, Ronnie Simpkins, Sally Van Meter, and guest musicians Casey Driessen, Jim Guttmann, Rose Sinclair and Zoux. Album includes 16-page lyric booklet. Initial reactions to Crazy Faith: Alison Krauss: 'Mark Simos is a remarkable songwriter. He's one of those rare people who knows what words sound good together, and his lyrics are just as unique as his melodies. I never stop being amazed at his songs, and I'm never surprised that I love another one.' Alice Gerrard (from the album introduction): 'It's love's whole mess he's talking about here; and it's personal, and universal, and unafraid. I love the spare arrangements; the tight, lovely harmonies; the beautiful winding, twisting melodies; the words and phrases that wind and twist along the same path; and the way that Mark, as a songwriter, both acknowledges his connection to tradition and builds on it.' Songwriter Bob Franke: 'Every now and then you run into an artist who has spent enough time with traditional music to learn it's spiritual as well as it's musical lessons, and to use that learning to forge an art that is at once timeless and utterly contemporary. Mark Simos is one of these people, and with the help of producer and master fiddler Bruce Molsky, as well as a stellar assortment of musicians, he's put together a stunning collection of songs demonstrating that art. Traditionalists who listen to this recording are going to get their hearts stretched, and somewhere out there there's a young singer-songwriter for whom it will open a door to an entire world of possibilities that were previously obscured by the flim-flam of the music industry. One hopes that this sort of thing might do for traditional American music what folks like Christy Moore did for the Irish; in any case, it's a joyful occurrence for the likes of me, and for many more, I suspect. Mark's the real deal.'

Here's what you say about
Mark Simos - Crazy Faith.