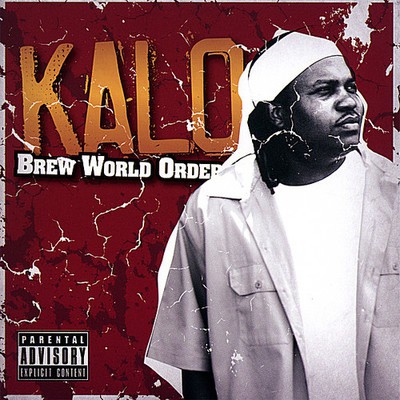 Blessed with a crisp delivery and a demanding presence on the mic, Kalo is a street poet in the truest sense. His sound is an aggressive and gritty combination of his West Coast roots and the Midwest aesthetic that defines him today. While his influences may span regions, his place among the most talented in the Midwest is unquestioned. "That bullshit they taught me from day one, they never mentioned me/now we are thugs from elementary to penitentiary/my sentence be a lifetime full of guns, drugs and Billy clubs/you silly thugs, stop hittin' the snooze button and wake the fuck up." - Kalo, taken from "3-Headed" A veteran MC, Kalo has spit many resonant verses and Hip Hop quotables over the years, but this excerpt from the new track "3-Headed" speaks towards his mentality as an artist and individual. Born in Watts (CA) and raised in Milwaukee (WI), Kalo has lived the street life, yet emerged with a determination evident in his music and daily life. While he comes from a city that produced Hip Hop legends NWA, DJ Quik, and MC Eiht, Kalo draws his influence not only from these Compton icons, but also the Hip Hop legacy that the rest of the country has produced. Kalo speaks on what he's seen and experienced with a versatility not often found in the modern MC. The reality of the streets is not a revelation in the world of Hip Hop, but Kalo strives to examine this in more detail than the one-dimensional depictions that are all too prevalent. There are the moments of celebration and indulgence, such as "Head Nod" and "Lil' Drink," where Kalo flaunts his ability to make feel-good music, with a hint of a humor reminiscent of E-40. While the creativity and range as an MC is apparent throughout his catalog, it is clear Kalo demands the same qualities in his production. This uniqueness is heard on "Brew World Order," in which Kalo spits over an instrumental that serves as a beat boxed ode to the Old School. "3-Headed" finds Kalo questioning the negative expectations that society places on those in the ghetto and the consequences. Among these consequences are the fake thugs that pervade the streets, of which Kalo calls out and demands to "wake the fuck up." As Kalo prepares to release his third album, due out this spring on North Coast Entertainment, he also prepares to take his next step as an artist. His previous two albums 'How Lo Can You Go' and 'He Cold' did a great deal in building up Kalo's regional presence and made him a favorite in an emerging region with an array of talent. The development of Kalo's ability as a lyricist and the musical backdrop are evident from start to finish of the new album, one that's sure to assist the masses in discovering their new favorite rapper.

Here's what you say about
Kal - Brew World Order.