James Durst - My Country Is the World 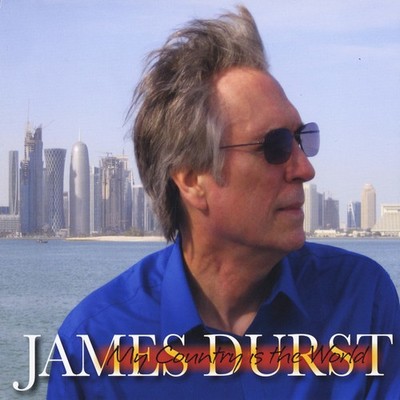 Revisited, remixed, remastered reissue of James' 1997 release, 'My Country Is The World' now contains 20 tracks featuring songs in 19 languages (with the addition of SIX BONUS TRACKS), collected over 4 decades of international touring and recorded over the course of 2 years with the help of numerous musicians in 8 studios from coast to coast. 75 minutes of songs from such contrasting world cultural traditions as Icelandic, Chilean, Vietnamese, Danish, Turkish, Greek and Hebrew, many sung bi-lingually (e.g., Vietnamese & English, German & English, etc.) to enhance their accessibility. Particularly poignant is the 500-year-old Vietnamese love song, 'Qua Cau Gio Bay/Wind On the Bridge,' learned from that country's premier songsmith Pham Duy, with whom James toured throughout South Vietnam in 1974. Much beloved throughout Vietnam and the Vietnamese diaspora, Pham Duy passed from this life in January, 2013. 'I've been extremely blessed for music to have been my ticket to the planet over the past 40+ years. These songs that were at one time precious souvenirs of travel experiences, have become intimate friends and companions. My mission is to provide a footbridge between disparate cultures, reminding us of our interdependence with one another and all of life.' --James Durst 'The diversity is astonishing: Vietnamese, Turkish, Icelandic, Hebrew, Chinese and Danish just for starters. Durst's sense of arrangement ensures that the material is both smooth and coherent, and he is able to unite the wide spectrum of cultures he embraces. Music, they say, is a universal language and Durst emphasizes this philosophy to good effect. This is a beautiful CD and a laudable attempt to bring together such disparate folk song traditions into one broad church.' --Ken Lush, Folk Roots Magazine (1997) 'A wonderful journey through so many countries. A really beautiful work.' --Diane Sward Rapaport, Author, How to Make and Sell Your Own Recording (1997) 'Thank you for sharing your multicultural experience with me. I listened to your CD several times and will continue. It is a very unique collection of songs. I love the guitar sounds, and it has lots of that. In addition there are so many wonderful ethnic instruments and sounds. The booklets with contents description and lyrics (are) a real help that make this whole CD a very educational experience and makes me (want to) learn the songs. It is amazing that you can sing so many songs in their native language with such clarity, accuracy and depth of feeling. Personally, I especially liked your songs in Spanish ('Gracias a la Vida' and 'El Condor Pasa'). But the other songs are great too. Thank you. I will treasure this CD collection.' --Ben Rozenblat (5/13) 'Thank you so much for your blessed music! I seem to realize that your voice is part of the music of my soul. I feel very lucky to have met you that night at the Himalayan Institute so many years ago... forty something years ago? Have always really appreciated your dedication to your art. The world is a better place for your music and the care behind it.' --Jody Jensen, Lakehead CA (5/13) 'Shimmering! A superlative piece of work.' --Bennett 'The Eastside Flash' Spielvogel, Musician/Recording Engineer 'We enjoyed the music very much.' --Stevie Beck, Producer, A Prairie Home Companion With Garrison Keillor 'Can't sing your praises enough... thanks for making the world a better place. PS My favorite song today is Thoughts are Free (Die Gedanken Sind Frei)...love it (and all the others).' --Rodney Richards, Writer, Princeton NJ (4/13) Quietly traversing the planet as a touring artist since 1965, James has performed for rapt audiences of all ages in all 50 states & the District of Columbia and more than 200 cities in 45 countries throughout the Americas, Europe, Scandinavia, the Middle East, Southeast Asia, in Russia, Azerbaijan, Japan, Korea and most recently, numerous times in India (7x) and Israel (4x). Drawing from a rich and ever-evolving repertoire of distinctive songs both original and gathered in some two dozen languages that reflect a global perspective and underscore the interconnectedness we share with all of life, James engages each disparate audience in a participatory journey condensed from his travels, bringing us closer to our world and to each other. James employs his role as minstrel to communicate global and social concerns common to us all, such as environmental sustainability, world peace and greater human understanding, distilling them into the profoundly personal - and vice versa; while employing the uniquely synergistic qualities of word and melody to dissolve language, cultural and other barriers. Once, following a concert in Skopje, Macedonia, a woman who spoke no English found James backstage. Through an interpreter, she said "I didn't understand a word, but," touching the area of her heart, "I understood what you were saying." The interplay of his skillful, rhythmic guitar playing and strong, expressive voice provides a colorful palette which he uses to paint compelling musical pictures that encourage individual empowerment and compassionate relationships, while helping us to feel more hopeful about ourselves and our place on the planet. James' performances are spirited, lighthearted, relevant and often humorous. 'My Country is the World' is dedicated to six of James' nonagenarian mentors in music and in life: legendary folk icon Pete Seeger, 'Tzena Tzena' composer Issachar Miron, Vietnamese composer/collector Pham Duy (1920-2013), James' high school choir director Marvin Fennema, James' mother Marie Durst and pioneering world citizen Garry Davis. 'My country is the world and my religion is to do good.' --Thomas Paine.

Here's what you say about
James Durst - My Country Is the World.