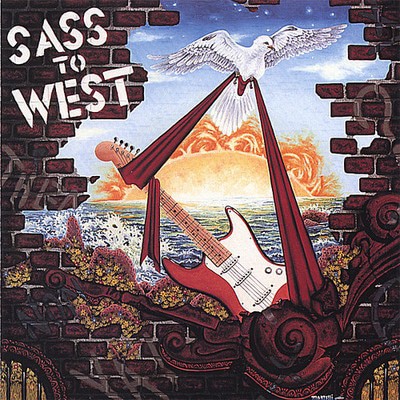 When Sass first appeared on vinyl, it was on the Live at The Rat album, from a compilation of the Boston bands responsible for the fertile music scene that gave birth to The Cars, The Stompers, Boston, J. Geils, and Aerosmith. Their path took them through a roller-coaster ride of ups and downs, until one fateful day in North Brookfield, Mass., when a chance encounter in the bar they were playing the night before, got Vernon West, bass player and one of the two lead singing, harmonizing West Brothers, a backstage pass to the Bonnie Raite show the next afternoon. The next day found Vernon making the acquaintance of Ms. Raite, who upon learning of the missing opening act, recommended to the promoter that "Vernon's band" open the show for 12,000. The rest, as the saying goes, is history. Dana West, lead guitarist and other lead vocalist for Sass, was summoned, along with their drummer, and as they hit the stage vibrating with adrenaline, they kicked off the show with a song they'd just written out of frustration with all the DJ's playing disco at the clubs they played: Radio. The crowd dug it, and the next time the band played in Boston, there were lines around the block. Sass played all over New England for the next few years breaking attendance records wherever they played and were courted by many labels, but due to the unfortunately mismanagement that befalls many a great band, along with the nefarious theft of their equipment by the slime that preys on innocent artists everywhere, they were stopped cold in their tracks. Many fans mourned the fact that many of their great songs would not be released, only having made vinyl with a single sold by their wayward manager to Roulette Records without their permission. Radio with the B-side, Treat Me Right, were on the single that was released by Roulette in 25 cities. It short life had it in the Top 10 "out of the box"in 25 cities, and Number 1 in Boston, selling out in all the record stores. The irony was that Vernon and Dana never even got a single cent, nor even a single record, until a fan gave them one 10 years later. They took some time off to find their legs, and when they finally got back on their feet, they made some of the best music of their lives. They were so burned by the industry, that they were happy to play their music for whomever would come to see them, and did so in Boston for a few years until finally, with the coaxing of fans and friends, went into the studio to record "Sass to West" a retrospective CD that has 19 songs: the first 9 being the best Sass hits from 1979 through 1985, then the next 9 being their newer songs as West, their name for a few years when they needed to distance themselves from their painful Sass memories. The last song on the CD is Little Drummer Boy, a Christmas Carol that became a holiday standard around town, and is probably the best Rock version of that song ever recorded. Sass is back again, making music regularly, and getting some incredible new compilations of the early recordings together for sale, both digitally and as CDs, as well as planning some new and exciting plans for music in the future! Stay Tuned!

Here's what you say about
Sass - Sass to West.