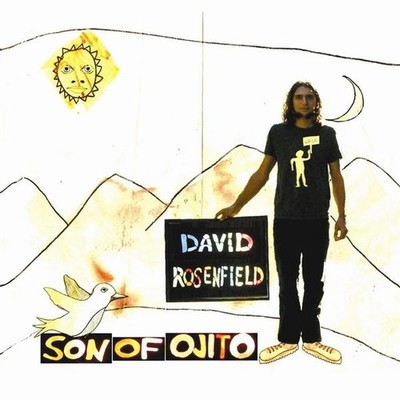 In some ways, David Rosenfield is a throwback to a forgotten era. He is a songwriter who understands that great songs are essentially small pieces of poetry, and that a singer is really a poet. In that, Rosenfield's music is a tribute to all the greats that have gone before, with folk-based paeans celebrating the work of artists from Bob Dylan to Leonard Cohen via Townes van Zandt, Neil Young and even Allen Ginsberg. Yet, like all great poets/singers, Rosenfield's voice is distinctly his own. The release of his first full length album - 'Son of Ojito' - will see Rosenfield spread his unique gifts to a far wider audience than he has previously been able to. Yet the album captures the same sound that he developed through gigging in and around his Florida base. Like all the best blues and folk records of the last century, 'Son of Ojito' captures the intimate, live feel that is essential to Rosenfield's music. These are deeply emotional songs; raw and affecting in the way that, sometimes, only one man with a voice and a guitar can be. The songs are sometimes funny, sometimes sad, sometimes light and sometimes dark, but each and every one is truly a part of their creator's soul - and that's what true songwriting should always be. Rosenfield's guitar playing has the same raw intensity as his singing and his writing. His distinctive folk music combines elements of rock'n'roll, acoustic blues, country, and even modern indie and punk. The son of a professional folk musician mother, music was always in Rosenfield's heart. He has absorbed music wherever he has gone, a fact reflected in this record, which has the influence of The Doors, Nirvana, Beck, the Violent Femmes and many others mixed in with the more traditional folk sound. Overall, 'Son of Ojito' is a record that will surprise as much as it will excite. It is a personal journey through one man's music, but is also part of the great journey of American folk. A journey that, thanks to artists such as David Rosenfield, shows no sign of coming to an end.

Here's what you say about
David Rosenfield - Son of Ojito.