Mike & Ruthy - Million to One 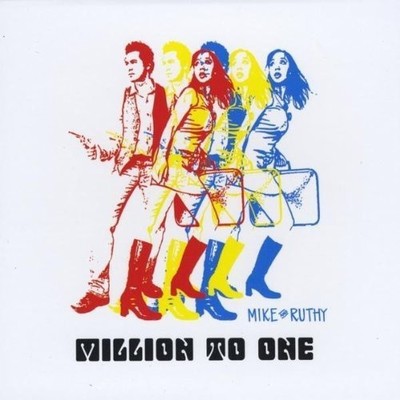 MIKE + RUTHY INVITE FANS TO HELP MAKE A FOLK-ROCK MASTERPIECE Mike + Ruthy, the folk-rock duo formerly of The Mammals, announce the release of Million to One on July 27th, 2010. The album is the latest in a growing discography that continues to push the boundaries of the genre. The story behind the making of Million To One is as compelling as the album's songs themselves. Where most bands limit fan involvement to the occasional live show "stomp, clap and sing-along" and post-show merch table pleasantries, Mike + Ruthy took things a two-step further. They issued a massive fan-list call-out inviting the full breadth of their fanbase to help make what's being called their "folk-rock masterpiece." "It's challenging enough to make it in this profession as independent artists," says Ruthy. "To launch our biggest release to-date during a recession? That seemed like the greatest test." To overcome the odds (which were, oh, around a million to one) Mike + Ruthy turned to the fundraising website Kickstarter.com. Using their two-year old son Will as the lead role, the couple created a short video appealing to their fans to help support the album. The result? "We set a fundraising goal of $5000," says Mike. "It was met and exceeded within a week." The outpouring of fan support only strengthened the duo's resolve and fueled a full-scale indie release of Million to One on their own label, Humble Abode Music. "It's a bit materialistic that it came down to money, but the show of support completely filled our hearts and made us even more driven to totally kick ass," adds Mike. Their supporting fans will not be disappointed. Million to One is easily the couple's best album to date and threatens to break all the rules of the rock-folk-Americana genre. The album's main attraction--whether weaving through the folky, banjo-flavored "As My Eyes Run Wild," the bar-room blues stomper "Covered" or the pedal-steel-laced "End of Time"--is the gorgeous, white-knuckle-tight harmony singing of Mike + Ruthy, who have clearly been spending the last ten years honing their vocal blend. With it's soft, breathy delivery, Mike's voice (not to mention songwriting) has been compared to Paul Simon, and indeed the vocal duets on this album will call to the listener's mind that particular quintessential duo. But what that 60's duo lacked, this one has in spades. And that's love, of course. One senses-and at times gets overcome by-the love that fills this album's cup to the brim. It's a love for each other, for their music, and-now more than ever-the fans who support them. About Mike + Ruthy Mike + Ruthy met in NYC, just out of college. Daughter to Hudson Valley fiddling legend Jay Ungar and folk-singer Lyn Hardy, Ruthy's was a past steeped in the folk tradition. Mike had his musical roots planted in the ska-punk and rock scene blasting from the college radio station in his hometown of Durham, NH. The two fell in love and went on to form the folk-rock behemoth The Mammals, which toured the world many times over. Now married and settled just outside Woodstock, NY, they tour with a full band or as a duo and sometimes share the stage with their fiddling two-year-old son, Will. Previous albums by Mike + Ruthy include the critically acclaimed debut The Honeymoon Agenda and it's follow-up, Waltz of the Chickadee.

Here's what you say about
Mike & Ruthy - Million to One.