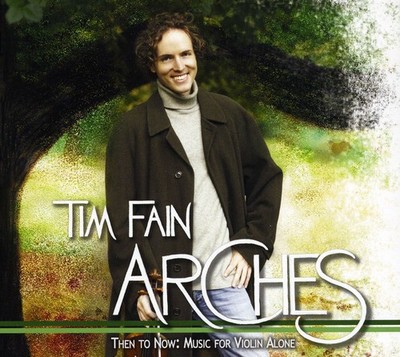 \'This is a disc that invites listeners to consider a new perspective on J.S. Bach\'s PARTITA IN D MINOR, by offering it the context of four new worksby composers who looked to the past for inspiration. Alongside the iconic Bach PARTITA I hope it will be possible for listeners to hear these distinctive American voices in a fresh and approachable way. The range of these pieces runs the whole palette, from Kevin Puts\' stunning mix of \'Bach meets Appalachian fiddle\' in ARCHES to the searching lines and driving power chords of Randall Woolf\'s NO AXE TO GRIND, and the brilliant and crazed passion of Daniel Ott\'s DOUBLE ARIA to Mark O\'Connor\'s CAPRICE NO. 6, all brightness, radiance, and energy.\' --Tim Fain With his adventuresome spirit and vast musical gifts, violinist Tim Fain has emerged as a mesmerizing new presence on the music scene. The "charismatic young violinist with a matinee idol profile, strong musical instincts, and first rate chops" (Boston Globe) was featured as the sound of Richard Gere's violin in Bee Season. Selected as one of Symphony magazine's "Up-and-Coming Young Musicians of 2006," and a Strad Magazine 2007 "Pick of Up and Coming Musicians," Fain has recently captured the Avery Fisher Career Grant and a Young Concert Artists International Award. As The Washington Post recently raved, "Fain has everything he needs for a first-rate career." A dynamic and compelling performer in traditional works, he is also a fervent champion of 20th and 21st century composers. His provocative debut CD on Image Recordings of music for solo violin reflects Fain's inquisitive passion and intellect by combining old and new in solo works by J.S. Bach, Kevin Puts, Mark O'Connor, Daniel Ott, and Randall Woolf. He was hailed for his appearance onstage with the New York City Ballet, where he performed alongside the dancers in the company's acclaimed premiere of Benjamin Millepied's "Double Aria," and he has also appeared with the Mark Morris Dance Group, Seán Curran Company, and Bill T. Jones/Arnie Zane Dance Company in the U.S. and abroad. He also continues to pursue his passion for jazz and has worked with jazz pianist Ethan Iverson, and recently appeared at the Jazz Standard with composer and saxophonist Patrick Zimmerli and The Cutting Room with composer Daniel Bernard Roumain. He electrified audiences at his New York concerto debut at Alice Tully Hall with Gerard Schwarz and the New York Chamber Symphony, and at Lincoln Center's Mostly Mozart Festival with the Orchestra of St. Luke's. Performing works from Beethoven and Tchaikovsky to Richard Danielpour and Philip Glass, he has been soloist with the Mexico City and Oxford (UK) Symphony, recently gave a special performance of the Beethoven Concerto at the Kimmel Center in Philadelphia with the Curtis Symphony Orchestra, and looks forward to his Baltimore Symphony debut with conductor Marin Alsop, an appearance as soloist with the Philip Glass Ensemble at Carnegie Hall in a concert version of Einstein on the Beach, and performances as soloist with the Champaign-Urbana and Maryland Symphonies, as well as recitals at the Philadelphia Chamber Music Society and in Utah, Maryland, Syracuse and elsewhere throughout the United States. He appeared in recital at Amsterdam's venerable Concertgebouw, Boston's Isabella Stewart Gardner Museum, the Kennedy Center Mexico's Festival de Musica de Camara in San Miguel de Allende, Carnegie's Weill Hall, New York's Kosciuszko Foundation, and California's Carmel Mozart Society, University of Georgia, San Diego Art Institute, University of California at Davis, and Boston's Ives Festival, and Alice Tully Hall and the 92nd St Y. A sought-after chamber musician, Tim Fain has performed at The Chamber Music Society of Lincoln Center, New York's Bargemusic, Chamber Music Northwest and the Ravinia, Spoleto (Italy), Bridgehampton, Santa Fe, Caramoor, Bard, Lucerne (Switzerland), Vail Valley, Moab, and Martha's Vineyard Festivals, and has toured nationally with Musicians from Marlboro.

Here's what you say about
Tim Fain - Arches.