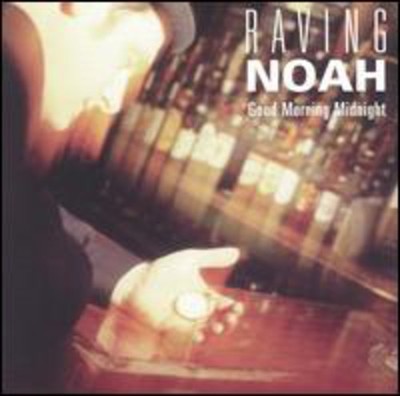 How do you describe a band whose idea of rock and roll includes gypsy-inspired rants, klezmer wedding dances, Irish ballads, tangos and French musettes? World music? Not if you mean studying cultures, examining musical strains and varieties and having tea with visiting musical dignitaries. Raving Noah's music gets lost in an ethnic neighborhood back alley, drinks with the locals and wakes up hung over on the wrong train home. Initially tried and tested inside the bohemian enclave and cultural stew of NYC's lower east side, violin, bouzouki, as well as a healthy dose of electric and acoustic guitars, bass and drum combine to create a joyful noise that seems best suited for a revival meeting rather than a concert hall. On Good Morning Midnight, the new CD, the band attacks the otherwise aforementioned quaint ethnic folk constructions with an unrestrained irreverence, owing more to Sandinista-era Clash than Paul Simon. Besides garnering a slew of positive reviews (see below), Good Morning Midnight has picked up airplay on 436 college radio stations around the country. REVIEWS NY Post (NYC/National) I If the Clancy brothers grew up on the Boardwalk of Asbury Park and had to cut heads with South Side Johnny, Little Steven and Big Bad Bruce, they'd be a lot like the Celtic-roots-rock band Raving Noah.... A musically refreshing disc that stretches beyond either rock or traditional Celtic music. The Star Ledger (Northern NJ) I A typical Raving Noah track combines slinky guitar, bouzouki or organ riffs with Ogilvie's rough but soulful Elvis Costello-like vocals. ... Also like Costello, Ogilvie has a knack for infusing Raving Noah's songs with a timeless quality. Dirty Linen (National) I Ogilvie's songs have a rough, melodic edge, some of which show an Irish influence (think the Mekons or The Pogues)... Ogilvie's drive and quirky sense of melody separate this from the standard Irish rock release. Village Voice (NYC) I A richly eclectic mongrel group, Raving Noah mixes Celtic, Gypsy and Heartland rock, punctuated by violin and accordion. Time Out (NYC) I ... includes folks who've done time with Loser's Lounge, the Mad Scene, Badawi and Lloyd Cole-no surprise, then, to hear they combine a wealth of international styles with rock. Soundviews (NYC) I ...hard bitten roots-rockers that wear the flags of many nations. Nimbly they move from Greek rembetika, then swerve into giddy klezmer and gypsy dance rhythms, not stopping until they reach the sinuous, hashish-inflected textures of the Middle East. ... Fans of multi-culti brace yourselves, because you're a captive on the Orient Express sharing a berth with Steven King and Charles Bukowski. Good Morning Midnight chosen 2nd best release of 2000 AMAZON.COM REVIEWS A music fan (Madison, NJ USA) This is a rootsy rag-tag band with strong songwriting craft. If you like the Pogues or Mekons, this is a record you'll find rewarding. Each time I lend this CD to friends, they invariably seek out their own copy. Eddy Howard (Dublin, Ohio) Raving Noah's new CD, 'Good Morning Midnight' is truly a tasty nugget. The Euro-gypsy-vagabond feel of traditional uillean pipes and accordian mixed with crunchy guitar and rock drumming keep this mix of gin-soaked tunes from falling into any of the encompassed musical categories. It is a buffet of folk, pop and rock with a two-fisted dash of ethnic flavorings. The carefully crafted lyrics bring to life feelings of contentment with the everyday, fear and foreboding as well as the euphoria of a drunken haze. This collection of songs is well worth owning and flaunting to friends as the CD you discovered before they were famous!

Here's what you say about
Raving Noah - Good Morning Midnight.