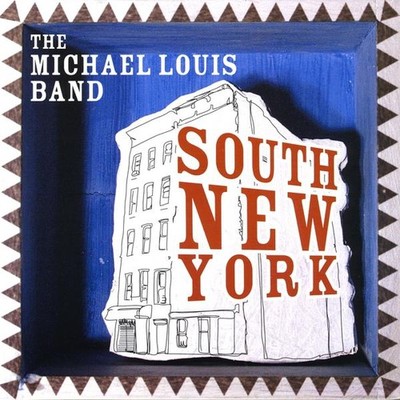 THE NEW CD 'SOUTH NEW YORK' to be released Summer 2009 on MMM Records. Available right here & now! The new CD from the Michael Louis Band is pure North meets South. The Brooklyn, NY Trio made the pilgrimage to the deep South to give the new CD an authentic feel, recording in Tupelo, MS, Memphis, TN, & Muscle Shoals, AL. 'We recorded right where the music we love was born'' sez Michael Louis. 'We love the blues, soul, funk, r&b, old school country, rockabilly and good ol' rock n roll'. 'It's in our music as well as our blood'. Co-produced by guitar legend Travis Wammack (16 yr old guitar prodigy in the early 60's with his hit instrumental "Scratchy", Little Richards band leader/guitarist for 10 years & Fame Studio session guitarist for the likes of Aretha Franklin, Wilson Pickett, Lou Rawls and even the Osmond's "One Bad Apple") who said "Yeah, This CD has to have it (the stank) and it does!" It's a raw, energetic CD where you can hear the sound of a real band playing together "live", capturing the moment and keepin' it real! From the soulful "Ain't That Kinda Man" to the funk of "Shade Tree", country meets the Kinks in "Country Girl", the Southern rock feel of " Saturday Night", the Allmanesque "Let It Go", the Meters meets psychedelia on "Cause Of Us", inspired by the before-during-after of Katrina's effects on the Gulf Coast. The CD then takes on a different vibe with the heavy blues-rock of "Reasons & Seasons", delta blues "I Fought The Law" (yeah, that "I Fought The Law"), the old blues chestnut "Ramblin' With That Woman" (where Michael & Travis got to trade licks), the super cool acoustic vibe of "Molly" ("They run for her just like a choo-choo trolley"), the mid-West rock sound of "Let Me Love You (With All My Heart), a killer rockabilly instrumental "Super Directional" and finally "Memphis Sound" & Memphis Sound (the Interview). I was lucky enough to not only be inspired to write a song in tribute to all the great music (rockabilly & otherwise) that came out of Sun Studios (thank you Mr. Phillips), but to have Sun Records legends Sonny Burgess & Billy Lee Riley sing on "Memphis Sound" (along with Travis & myself). The vocal session for "Memphis Sound" was cut @ Sam Phillips Recording Inc. in Memphis just a few blocks from Sun. The great Sun Studio session guitarist, Roland Janes, engineered the session. Roland can been heard on the rockabilly classics "Red Hot" & "Flying Saucer RnR" and almost all the Jerry Lee Lewis sides that came out of Sun (and alot more stuff). I also got to interview Sonny, Billy, Travis and special guest Sun Studio drummer, J.M. Van Eaton. That is the final track on the CD. Whew!!! With me on the journey were Andrei Sebastian - Bass (Yosi Piamenta Band, Billy Bell Band) & Eric Kalb - Drums (Sharon Jones, Charlie Hunter, Deep Banana Blackout). I couldn't have done it without them and without you. Thanks & you know we love you - TMLB "You guys may be from New York, but it must be South New York" - Roland Janes FIND YOUR WAY HOME TO "SOUTH NEW YORK"