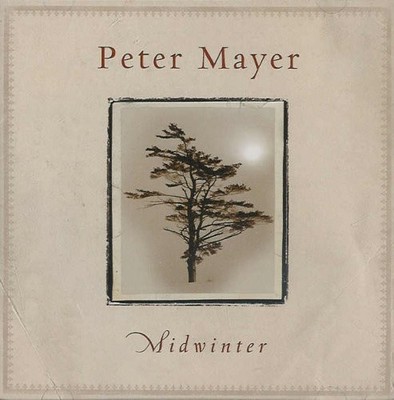 Peter Mayer writes songs for a small planet-songs about interconnectedness and the human journey; songs about the beauty and the mystery of the world. Whimsical, humorous, and profound, his music takes you up mountains, across oceans, into space, and back home again. A native ofMinnesotawith a background in Theology, Peter is not big on love songs, but prefers delving into science, nature, and things spiritual.. 'Peter Mayer is a magician...(his) universe is full of metaphor and meaning, story and symbol-everything contains more than meets the eye.' -- Bill Reed, music editor, Colorado SpringsGazette 'His guitar work is breath-taking, his lyrics mind-spinning, his singing soul-soothing and his feet-on-the-ground optimism nothing short of healing.' --Marilyn Rea-Beyer, music director, WUMB Radio, Boston 'He is unafraid of complicated topics and always strives to look beyond the easy sentiment...Peter does nothing less than address the very nature of our existence...Trust me, most songwriters can't pull this off. Peter Mayer does.' - -Dale Connelly, Morning Show Host, MinnesotaPublic Radio Peter started touring full-time in 1995 and has gradually amassed a dedicated, word-of-mouth following, selling out shows fromMinnesotatoTexas,New EnglandtoColorado. He has six CDs to his credit, and has sold over 40,000 of them independently. His accolades include numerous nominations for Minnesota Music Awards, and selections as a finalist in several songwriting competitions including Telluride and the Rocky Mountain Folksfest, where he has been invited back to perform and teach songwriting at the highly regarded Rocky Mountain Songschool. 'Mayer's songs are crafted like shaker furniture, with no place for superfluous embellishments or throwaway lines...(his) world is bright and hopeful and the transcendent nature of his lyrics...explore the mysteries of life...Mayer's fluid, clean, and tremendously intriguing guitar playing is topped with warm, rich vocals. This is music for the soul.' - -Acoustic Guitar Magazine 'There are at least a dozen Peter Mayer songs that I would love to learn myself, but I could never play them as well as he does.' --David Wilcox, Singer/Songwriter 'I'm a huge Peter Mayer fan, but only when I don't feel like killing him for being so good. I love Peter's work, though it irritates me that he plays so much better than I do. If I rocked half as hard as Peter does, I'd own the world by now.' --Janis Ian, Singer/Songwriter 'Mayer's appealing guitar style (is) alternately percussive, rhythmic, melodic, or all of the above.In Mayer's capable hands the instrument sounds like a calliope one moment, an orchestra the next and then a cleanly picked guitar a la Dave Van Ronk... Mayer is a performer at the top of his game who knows that the secret to living in a world of perplexing questions is enjoying the search for answers.' --David Kleiner, Minor Seventh Reviews Peter's latest CD is entitled Midwinter and features 12 new songs. He is currently working on a new songbook. Peter is an artist of relevance and insight whose music is not to be missed. 'Mayer offers up everything you could ever want from a singer/songwriter.' --Dirty Linen Magazine 'This native of Minnesotais a master storyteller.' --Folk Roots Magazine.

Here's what you say about
Peter Mayer - Midwinter.