Good Night City - You Are Almost There 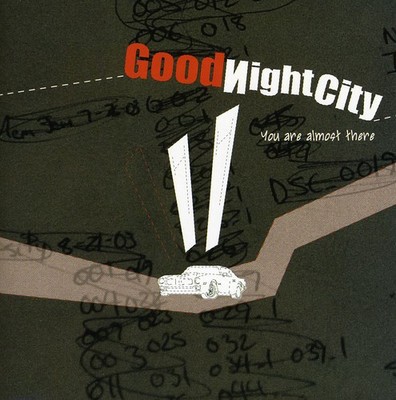 On a sweltering afternoon in August of 2003, the members of one of the Southeast's hottest rising bands (Field Day) sit in an Atlanta rehearsal studio. With a critically acclaimed debut album on the horizon and label interest growing almost by the day, the group has a dazzling future ahead. Knowing this, the band decides to choose a new name to coincide with the launch of the record. 'I like GoodNight City,' guitarist Blair Gilley declares to his band mates as they lounge comfortably on the floor between sets. 'It makes me think of arena rock and sold out shows.' Vocalist Dax McCall, drummer Josh Lee and bassist Chuck Pollitzer agree. And with that, a new chapter begins. The new name is a very fitting one for the quartet of rockers. Five minutes into one of their explosive, energy-packed live shows it becomes evident that while their friends were playing ball, these guys were playing air guitar in the mirror to Cheap Trick and Bon Jovi and it paid off big time. The chemistry between the members of GoodNight City is unmistakable onstage. Their dynamic performances, catchy hooks and clever melodies quickly win over even the toughest crowds. That same chemistry and charisma is captured brilliantly on their debut CD You Are Almost There, produced by industry veteran Jeff Tomei. GoodNight City was born in the spring of 1999. Blair and Dax began playing shows together at LSU and quickly developed a large following. Knowing they had hit on something big, the pair packed their bags and headed to Atlanta. The addition of Chuck and Josh in early 2000 made the lineup complete. The band's years of hard work are beginning to pay off. Since the relocation to Atlanta, GoodNight City has played more than 500 dates at clubs and colleges spanning 15 states. Three vans, two trailers, and 100 thousand miles later, this road-tested-and-approved band has built a dedicated fan base that continues to grow with each performance. It's not hard to see why this group is quickly becoming one of the South's favorites. With seamless transitions from driving, youthful pop tunes to evocative, introspective ballads, GoodNight, City's diverse array of music is as inviting as it is addictive. In four short years of touring, writing, and soul-searching, GoodNight, City have not only established themselves as one of the Southeast's hardest working rock bands, but have also developed and honed a unique style that is all their own. With a growing fan base, representation from one of the country's top entertainment firms and a catalogue of great songs, the future is looking 'Good'--to say the least--for these four boys who are ready to take the world by storm. You Are Almost ThereEngineered by Jeff Tomei Recorded at Cock of the Walk Studio, Kennesaw, GAReviewer -Blair Barnhardt Nestled in the foothills of Kennesaw Mountain lies Jesse James Dupree's recording studio. It seems fitting that within those studio walls a mountain of guitar sound was captured and subsequently pressed to form You Are Almost There. Not since the troops marched across the battlefield at Kennesaw has there been such thunderous activity in this suburb of Atlanta. From the opening drum flam in 'Come Down', to the closing unplugged version of 'Famous' production quality is second to none. With Jeff Tomei on the faders (Smashing Pumpkins, Jackyl, Jerry Cantrell), Good Night City has been afforded the opportunity to utilize world class production equipment and expertise to highlight their crafty songwriting and catchy hooks. In a era when it is becoming an epidemic that bands can't reproduce their cute recordings live, I can personally attest to this bands musical capability after catching their Atlantis set at The Cotton Club recently. They are one of the few acts that I have seen who can actually recreate their CD offerings live. While the highlights of this disc are too numerous for this review, let me go over one track as an example. 'Come Down,' opens up the project with a perfect arrangement and a kick drum that grabs the listener's ear and won't let go. Back ground vocals echo the chorus line to ensure that one has to spend the rest of the day with that damn hook in their head (this is how it is supposed to be folks). The mandatory octave strums of today's punk/pop bands are sprinkled for good measure by Mr. Tomei as are the little harmonies in behind the bridge. The build up out of the breakdown should please major label executives. This disc can be summed up in a few short words: dynamic, professional, hooky and confident. If you enjoy any one of the following, Sum 41, Blink 182, Lit, or Green Day, buy this disc. Sheer ear candy. This band has raised the bar for independent recording artists. Be sure to catch this act live when they are in your City. Good Night, City.

Here's what you say about
Good Night City - You Are Almost There.