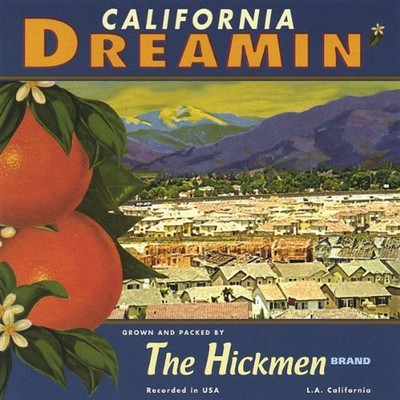 Energized by the songwriting on their first CD, Welcome Home, as well as regular live dates in Southern California, The Hickmen turned to political themes for this, their second CD . Though they take shots at second amendment rights as well as red vs. Blue America, these rockin' guitar tunes find their softest target in the ever-expanding homogenization of the Southern California landscape known as sprawl. Perhaps no other region of the country is as connected with sprawl as Southern California, but as the popularity of this 'land-use' spreads across the nation, it occurred to The Hickmen that the American Dream may need a re-write. From the opening salvo of 'Hills of California,' to the textural depth of 'Fever,' through the big-box asphalt desertification of 'Costco Socks,' to the rave-up of 'Envy,' the majority of these tunes are a sprawl-aholic's nightmare. Think Joe Strummer meets James Howard Kunstler. The Hickmen proudly take their name from Johnny Hickman of Cracker. Years ago, Johnny and members of The Hickmen released a record on Elektra and toured the country. They also grew an appreciation of Johnny's songwriting skills. After playing an entire set of Hickman songs at a Gram Parsons festival in Joshua Tree, California, the band could think of no finer homage to their hero than to name the band after him. In addition to covering one of Hickman's songs here (Father Winter), The Hickmen also got Johnny to play lead guitar on three songs. And the result won't let you down. If you feel that a meal of rock and roll isn't balanced without helpings of anger, passion, and angst, then The Hickmen have supper ready. If you feel that the American comb-over known as sprawl needs a stiff wind, then The Hickmen are jet-powered. If you feel our leader's vision of 'real America' leaves you out, then The Hickmen see the truth. If you... Ah, you get the idea. This is a masterful collection of populist whup-ass. Buy it.

Here's what you say about
The Hickmen - California Dreamin.