Andrews Kiive Acoustic - Cause That's What Dogs Do! 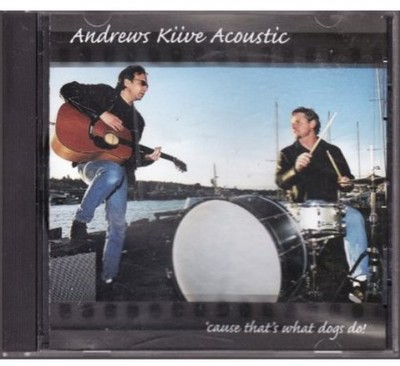 Steve Andrews, guitarist for Andrews Kiive Acoustic, has been writing and performing music for over 20 years. He first became interested in the guitar when a friend brought his electric guitar to class in grade school. Then, in 1979, Steve attended his first concert- KISS. It was at that concert that he decided to pursue a career in music as a guitar player. Influenced by artists ranging from Led Zeppelin to Robert Johnson, he has explored a variety of styles including hard rock, heavy metal, blues, folk and classical. During his high school years, Steve played several bands. In 1985 he moved from Hoquiam, a small town on the coast of Washington, to Seattle to pursue his musical career while also attending the University of Washington. In 1991 he met Kevin and they formed Big Bad, a popular hard rock band that released four well-received CDs and performed hundreds of shows in the Seattle area. KEVIN'S BIO Kevin Kiive, vocalist for Andrews Kiive Acoustic, was destined to be a musician since day one. Writing and performing music for over 20 years, much of Kevin's passion for music and organic growth was inspired by his grandfather, who taught him how to tap into is natural sense of musical rhythm. Pursuing his initial interests as a drummer, Kevin soon realized his true musical calling had a far greater reach. He moved to the forefront, becoming a highly accomplished charismatic vocalist, with the ability to compose inspiring lyrics and captivating melodies. During the last five years he has added recording engineer, producer and some guitar to his list of accomplishments. It was in 1985 when, Kevin moved to Seattle from Vancouver Washington to further his musical career by studying vocals professionally. This is where he and Steve met and joined their musical talents to build the foundation for which they stand today. In 2001, after 10 years of performing primarily hard rock, Steve and Kevin decided to change direction and revisit their acoustic roots. This stripped down format has proven to be a wise decision for Andrews Kiive Acoustic, showcasing their musical abilities and complementing the melodic nature of the music. The foundation of AKA's sound consists of guitar, vocals and bass with some cello and percussion. Readily accessible the music appeals to a wide audience. Their original songs are rock-influenced with an emotive content and feature powerful, yet memorable melodies combined with highly expressive lyrics.

Here's what you say about
Andrews Kiive Acoustic - Cause That's What Dogs Do!.