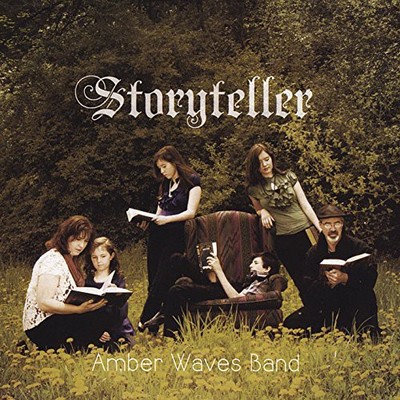 The driving acoustic sound of the Amber Waves Band, featuring the Costello family, evolved out of a love for old and new world folk music. When the band first started, the environment, playing opportunities, and the beginning teachers available in the area were largely influenced by bluegrass music. Although the band had very little personal experience in bluegrass, they jumped right in, learning the craft. As their skill progressed, they found themselves drifting away towards the music they all originally loved from the start, various world folk music styles. In the process they found themselves adding the drive of bluegrass to some of the wonderful tonalities in the old folk music, creating a very unique sound of their own. Much of their music is a recreation of music from the past in their own original arrangements, with each band member contributing their own artistic interpretations. Stunning originals, composed by Alexandra, have shown to be album favorites, which also highlight her stunning voice and guitar. Alex's twin sister, Kaitlin, brings in haunting harmonies and occasional lead, and has developed much of her own unique 5-string banjo style, pulling occasionally from bluegrass tradition, and mixing it with Irish influences, as well as her original folk interpretations. Sean provides lively lead and harmonies, as well as develops all of the original fiddle arrangements, switching between different styles of fiddle playing and even classical tones as the mood requires. Mary provides her charming young voice, Michael brings in the bass, lower harmonies and lead, with Cheryl Costello filling out additional original composition to highlight other band members, and joining in with the mandolin, flute, or fife.

Here's what you say about
Amber Waves Band - Storyteller.