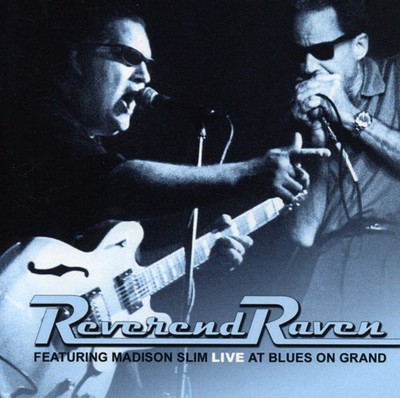 'Madison Slim is a terrific harp player' Bruce Iglauer/Alligator Records 'Reverend Raven and the Chain Smokin' Altar Boys --- My favorite, even the stiffs were rockin'. Buddy Guy quoted them saying 'They are very, very good!!!' They really, really were! The harmonica player...all I can do is sigh' (From the Chris Isaack bulletin board) Born and raised on the south side of Chicago Richard Raven first heard the blues of Louis Jordan, T-Bone Walker and Pee Wee Crayton coming from his mother's stereo. His older cousin later brought home the records of Muddy Waters, Howling Wolf, Magic Sam, Slim Harpo, Buddy Guy and Otis Rush. After seeing Freddy King at the Kinetic Playground, he started going to Maxwell Street on Sunday afternoons to see Johnny Dollar, Lefty Dizz and Jimmie Lee Robinson play in the alleys and on the street corners. The 1970s were spent going to the clubs and taverns on the south side of Chicago and Chicago Heights to see and hear raw urban blues. After playing in bands for 5 years and doing a 15 year stint in U.S. Navy, where he acquired the Reverend tag, Chief Raven hung up his anchors to give music another go. That was nine years ago and he hasn't looked back. Since then he has become a regular on the Midwest blues circuit, playing Buddy Guy's Legends, The Slippery Noodle, Memphis Smoke, Fat Fish Blue, Blues on Grand, The Zoo Bar, Whiskey Junction and most of the Midwest blues festivals. Rev has won the Wisconsin Area Music Industry Award (WAMI) for best blues artist in 1999,2000, 2003,2004 and again in 2006. Madison Slim walks the walk and talks the talk. He is a direct link to the golden era of urban blues played in the clubs of Chicago in the 1950s and 60s. First as a fan, then a student and finally as a player in his own right. He has played, traveled and roomed with a long list of heavy blues man, including Jimmy Rogers, Pinetop Perkins, Willie 'Big Eyes' Smith, Calvin 'Fuzz' Jones, Ted Harvey, Sam Lay and many, many more. A member of the Sam Lay Blues Band, The Legendary Blues Band and finally the Jimmy Rogers band, he has lived and played hard all around the world. This night at Blues on Grand he was in fine form. This is really his CD and I hope it showcases his passion and commitment to playing his blues.

Here's what you say about
Reverend Raven - Live at Blues on Grand.