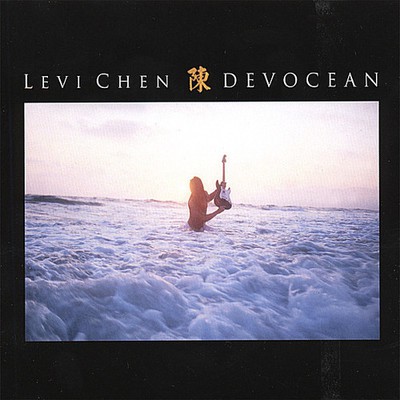 In July 2007 DEVOCEAN made it's debut at #3 on the NAR (New Age Reporter) NEW AGE CHARTS Top 100, New Age/Ambient/World Radio/Internet Airwaves. In an expanding world of available music, Levi Chen's unique musical voice is instantly recognizable. Performing solo, or with his ensembled Liquid Gardens, Levi's sound is a gift for anyone who appreciates the musical experience of timeless compositions performed by a visionary artist. Levi performs on one of the newest and one of the oldest stringed instruments known to man: A Fender Stratocaster electric guitar, and the Gu Zheng (Chinese Harp or Zither,) an ancient instrument played in China for 3,000 years. Levi's ability to express himself on these two instruments is all the more remarkable in that he performs on them simultaneously, a technique he calls 'solo duets.' Levi has been heard on over 350 radio stations, in over 30 countries. His latest recording 'Alhambra,' was the number #1 radio recording for October 2001, as reported on the New Age Voice 'Airwaves' airplay charts. His music has been featured on national and international TV shows, such as 'Friends' and 'Dangerous Minds.' DEVOCEAN also includes a free DVD of 'Sound and Recent Sorrow.' **PRO REVIEWS FOR LEVI CHEN & LIQUID GARDENS*** The front cover of Levi Chen's DEVOCEAN (Yin Yang Records) has him waist deep in the ocean, holding a Fender Stratocaster, as the water seems to be coming in or out, but you see him within the flow of water. Behind him, a sun begins to set. Chen's music has always been one involving emotion and pride, whether it's about showing the world his guitar wizardry or displaying his love for both rock and classical, at times bordering on new age. For this one he reached deep down into himself and came up with a collection of songs that came about after the passing of his father. I definitely can feel the pain, sorrow, and suffering, but there's also an intense amount of gratitude, not only for his father, but also for life and his Chinese culture. The album begins with Conception, a peice called 'Memory (DNA)', and the way the trumpet comes in as a cello makes it way through, and Chen adding in each note selectively, one can sense it will be Chen's versions of the blues. He plays the acoustic guitar beautifully, but with the electric guitar he expresses himself through his playing, similar to Carlos Santana's playing for almost 40 years. In 'Manha De Carnaval (Katrina)', he plays the song and one can imagine the visuals all of us got to see on television, the hurt and suffering from those who lost homes, personal belongings, and of course their loved ones. Throughout the album he plays with such eloquence, and that is a statement to Chen's commitment to his music. One can also hear and feel honor, and just as he makes his guitar weep, the listener can't help but feel that pride too. Some of these songs would do well in a jazz or smooth jazz setting (perhaps smooth jazz radio could help open him to a new audience), but anyone who loves guitar-based rock, especially the works of such masters as Eric Clapton, Duane Allman, Robert Cray, and John Mayer, will find a lot in this album to pick out as favorites.- JOHN BOOK, MUSIC FOR AMERICA For those who follow the jazz or world scene, this is a lush, multi-dimensional album blending the listenability of new age, the sophistication of jazz and the distinct color of the East. Bringing together the sounds of electric guitar with the Gu Zheng, a harp-like instrument with a 3,000-year history in China, Levi creates expansive, smoky sonic atmospheres that bridge musical taste and history all at once. With every track, 'Liquid Gardens' very much lives up to it's name, making it ideal for relaxation or a quiet fireside dinner. - CD BABY "There are certain timeless elements of music that have the power to soothe, relax, heal and reconnect us to the greatness of the universe. Levi Chen does just that." - ALLMUSIC.COM 'Levi Chen has concocted an East/West and further west fusion...beautifully fragile melodies draped in ethereal atmospheres.' - BILLBOARD MAGAZINE "Highly original yet profoundly peaceful... each listening yields new delights and serene feelings... these instruments sound as though they were made to go together, and Chen's electric guitar is the glue that holds them all seamlessly together..." - SEATTLE TIMES 'Few have brought together the ages like string virtuoso Levi Chen...spinning dreamy clouds filled with echoes and eerie twang as if Pink Floyd had been produced by Confucius....' - VANCOUVER ECHO "Levi Chen can take you directly into musical meditations... music that has to be heard to be believed... it's unique quality will impress you beyond words." - NEW TEXAS MAGAZINE 'Lush soundscapes balanced by enthralling melodies...personally I believe that Leo Fender smiled when he heard the true voice of his creation in Levi Chen's most capable hands.' - THE NEW AGE SAMPLER 'The symmetry of East and West he achieves let's the two instruments meld their sounds together...Levi Chen manages to express himself with a distinctive voice that sets him a notch above a very crowded field.' -NEW AGE VOICE "He places notes as an artist might paint, precisely and impeccably, weaving whole cloth out of the musical heritage of two wildly disparate times and cultures...a deeply spiritual, meditative jam session..."-NEW AGE RETAILER.

Here's what you say about
Levi Chen - Devocean.