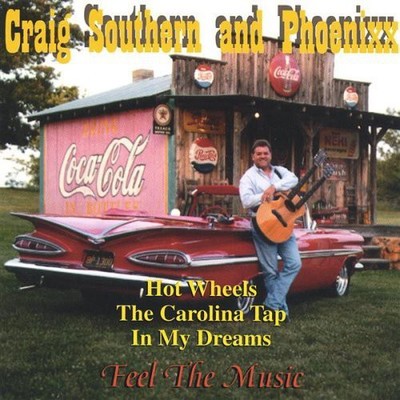 CRAIG SOUTHERN, the front man for Craig Southern and Phoenixx, started playing guitar as a six-year-old and currently resides in the community of 'Jot um down,' roughly 35 miles northwest of Winston-Salem, North Carolina. Southern, who primarily plays the 12-string guitar and sings, played back up for Freddy Fender from 1975-77. From there, Southern and his band churned in more gigs, playing nearly 200 a year during the 1980s. Southern has opened for what could be considered a 'who's who' in country music, including: Kenny Rogers, George Jones, Conway Twitty, Tammy Wynette, Merle Haggard, Ronnie Milsap, Loretta Lynn, Dolly Parton, Barbara Mandrell, Jim Stafford, The Kentucky Headhunters, Crystal Gayle, Hank Williams Junior, Roy Orbison and Jerry Lee Lewis. Other musicians of note on 'Feel the Music' include: DAVID JOHNSON - Johnson is quite simply one of the most versatile studio musicians anywhere regardless of the type of music. Johnson plays just about every musical instrument known to man. He's also produced more than 250 albums and also produced hundreds of singles and movie soundtracks. Johnson has also worked with loads of big names in the gospel world, including: Jeannie C. Riley, Freddy Weller, Del Reeves, Stan Hitchcock, The Kingsmen, Robbie Hiner, The Hoppers, The Hayes Family, The Moody Brothers, Tommy Faile, George Hamilton IV, Oliver Lulubulle Wiseman, Harry Deal and the Galaxies. Johnson now works as a creative consultant for several studios and for several artists in the Southeast United States. JEFF COLLINS - An established pianist, Collins has performed in clubs and venues all across western North Carolina. Collins also managed two groups, the Jeff Collins Band and the back up vocal group, "Assurance." Collins mainly does work now as a session musician. He produces and arranges music for Horizon Records. TODD WRIGHT - Wright, a saxophonist from Kentucky, attended Appalachian State University in the early 1980s and became a fixture in North Carolina musical circles. Wright is currently a music instructor at Appalachian State University.

Here's what you say about
Craig Southern - Feel the Music.