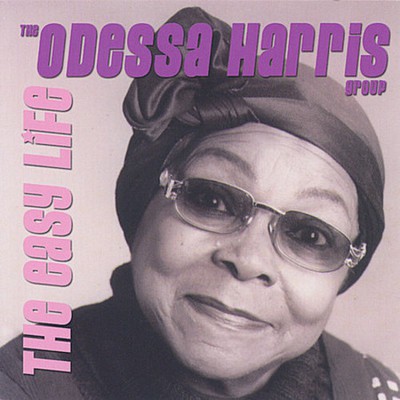 Vocalist Odessa Harris represents a generation of artists connected to the birth of rhythm and blues popular in American music. Deeply rooted in the musical traditions of The Mississippi Delta region, her charismatic performances consistently display an innate ability to express themes in music that transcend classification. In a career that spans over five decades, Ms. Harris continues to deliver a diverse selection of music guaranteed to warm the heart of any audience. Born in West Helena, Arkansas on June 8, 1936 - Odessa Harris began singing in the choir at a local Baptist Church. After a few years of singing with various bands at local gambling establishments ('crap houses'), Ms. Harris landed an engagement with James 'Peck' Curtis and The King Biscuit Boys on radio station KFFA 1360am during the Peabody award-winning blues radio program, 'King Biscuit Time' - she was 14 years old at the time! This led to a tour as a featured vocalist with Robert Nighthawk. In the pursuit of further exposure, she worked with a touring carnival show managed by entrepreneur Jerry Jackson between 1949-1953. Frustrated with conditions in the industry, Ms. Harris relocated to Jacksonville, Florida where she became a fixture in the local nightclubs. During the summer of 1959, Ms. Harris and a few girlfriends visited a local nightclub in order to hear visiting artist, B.B. King. Upon request of the audience, Ms. Harris joined the band for a few tunes. At the end of the performance, Odessa was summoned to visit the artist dressing room, where Mr. King invited her to join his organization, with one stipulation - 'if you want a job, the bus leaves in the morning.' Ms. Harris accepted the invitation, working as a featured vocalist with B.B. King from 1959 until 1961, recording two 45(s) for The Uptown label - highlighted by an energetic performance of Buddy Johnson's, 'Since I fell for you.' Upon her departure in 1961, she found new management and relocated to Miami, Florida. A chance meeting with Clive Davis facilitated recording sessions in New York for Capitol records. Although this material was released on two 45-LP(s), all publicity for these recordings was neglected in lieu of management for Nancy Wilson and Dinah Washington. Upon the recommendation of her manager, Jack Millman, Ms. Harris moved to Detroit, Michigan in 1972. After several years working as a freelance vocalist in the Midwest, she reconnected with drummer Sonny Freeman (Bobby 'Blue' Bland, B.B. King). Sonny Freeman and the Unusuals (featuring Odessa Harris) was a fixture in the Midwest rhythm & blues circuit until the death of Mr. Freeman in the late 1980's. Ms. Harris retired from her active performance schedule, seeking shelter within the community of a local Buddhist temple. During her hiatus from the music industry, Odessa was consistently encouraged by jazz trumpeter and fellow Buddhist Marcus Belgrave (Ray Charles, Lincoln Center Jazz Orchestra) to reconsider public performance. A visit to The Music Menu Café with Mr. Belgrave yielded an introduction to drummer/manager RJ Spangler. For the past three years, Ms. Harris has made select appearances in Southeastern Michigan and northern Ohio with an ensemble under the direction of RJ Spangler, featuring guitarist John Barron and organist Duncan McMillan. The Easy Life (Eastlawn records), her first recording in over 30 years, was released in March 2003. Sadly, Miss Harris passed away in August of 2007.

Here's what you say about
Odessa Harris Group - Easy Life.