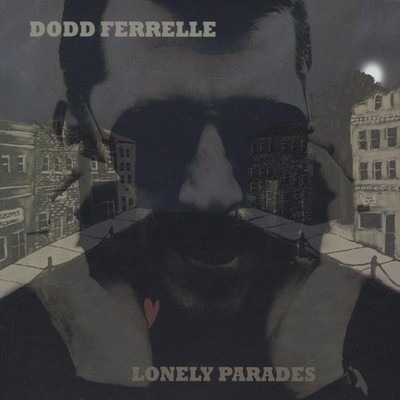 For anyone who has followed Dodd Ferrelle's music since the critically-acclaimed album A Carriage on the Hill, it will seem like he has come full circle with the release of Lonely Parades. The new CD not only features the return of players who appeared on Carriage, including Jon Mills, John Neff, David Barbe and Betsy Inglesby, but also comes closer to capturing the feel of Carriage than any other record in Dodd's catalog. Dodd's familiar wail is upfront and center on Lonely Parades, but with even more exuberanence. The songs on Lonely Parades come from a different place than Dodd's previous two releases with the Tinfoil Stars. Dodd and The Tinfoil Stars hit the road soon after the release of Always Almost There and only took a break from touring long enough to record it's follow-up, The Murder of Love. Those two CDs were packed with songs written and road-tested with a working band that played venues from Jacksonville to New York City. Dodd has spent the past two years reclaiming a personal life: getting married, having babies, and writing the songs that became Lonely Parades. The droll, dark lyrics of love lost and life challenges that always populate Dodd's songs are present on the new CD, but Dodd offers more optimism this time, best personified with the hopeful roots pop of 'I Can't Wait.' Taking a break from touring and recording with the Tinfoil Stars has allowed Dodd more time to work on the instrumentation and sonic pallet of Lonely Parades. Instead of being a stripped-down affair with just bass, guitar and drums, Lonely Parades breathes with all kinds of instrumentation, including bells, pedal steel (courtesy of John Neff), trumpet and even a saw (played by Claire Campbell from Hope for A Golden Summer). Drummer Kyle Spence (who has played with J Mascis from Dinosaur Jr. and The Tom Collins) and bassist Jon Mills, play on most of the songs on Lonely Parades. Revered roots rocker Jim White adds banjo and other instrumentation to the radio-ready 'Miss Bliss.' After listening to Lonely Parades, it is quite clear this is the most complete representation of Dodd's vision for his songs to date.

Here's what you say about
Dodd Ferrelle - Lonely Parades.