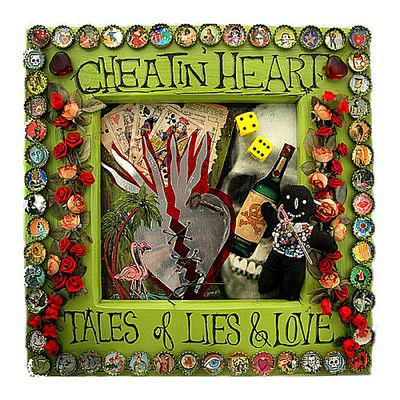 'As with other Baamo (Bay Area Arts and Music Organization) compilations, this one is a first-rate survey of the local scene. 'Cheatin' Heart' would be worth buying just for Ronny Elliott and Rebekah Pulley's duet on Hank Williams' 'Your Cheatin' Heart,' but there are 15 other good reasons contained in the grooves.' Curtis Ross, The Tampa Tribune 'It's quite a while ago that there has been a music-compilation with such a variety and so qualified and comfortable to listen to at the same time.' Old Stringhouse Music, Herford, Germany '[I] highly congratulate you for this compilation...a real pleasure.' Mike Penard, Lhuis, France "A superb showcase of Tampa Bay musicians, the compilation features fresh, choice recordings by local standouts like singer/songwriter Ronny Elliott, alt-country ensemble Have Gun, Will Travel and Rebekah Pulley & the Reluctant Prophets, whose previously unreleased "Watching You Go" is a charming pop gem that ranks as one of the accomplished singer's most endearing originals. Unlike the majority of multi-artist collections, 'Cheatin' Heart' has an appealing cohesiveness to it resulting from judicious sequencing and the unifying theme of betrayal." -Wade Tatangelo, Creative Loafing Debuting at 2007 CMJ, *Giddy Up, Helicopter! Creates "an almost palpable wave of sound as they weave sprawling guitar riffs, lap steel and resonating bass into a beautiful sonic fabric that is at once both rousing and melancholy." Reax Magazine *The Ditchflowers, whose inaugural CD "Carried Away" earned a feature on NPR, write songs that "stitch a pattern of simple chords but end up in a mosaic that makes real musical art." Not Lame American Songwriter explains why *Have Gun, Will Travel was featured in "Under The Radar: "HGWT's self-titled EP is a testament to the fact that you don't need ostentatious artwork or $25,000 production; all you need is good songs." American Songwriter "Nashville needs to head south and scout out *Rebekah Pulley - she's the real deal." Tampa Tribune "*Ronny Elliott should be among the first inducted into an Americana Hall Of Fame.' 3rd Coast Music "For my money, the Mojo Gurus are the best straight-up, good times, rock 'n' roll band in Tampa Bay. Former lead singer of '80s metal act Roxx Gang, Kevin Steele, knows how to sell a lyric better than most.' Creative Loafing 'This music is damn good. Why the hell are you playing on the street?' the New York Times asks Shawn Kyle of *The Beauvilles on 6th Street in Austin during SXSW 2007. *Lorna Bracewell writes songs that 'address hot-button issues in a feisty, thoughtful manner, without clobbering the listener over the head with ideology." Creative Loafing After playing guitar professionally for over 40 years, Greg Poulos is launching his own deal, Angels From Hazard, featuring the vocals of blues great Shawn Brown. Judy Tampa spent 24 years playing in a variety of San Francisco bands (The Beans, Girl Can't Help It, etc) and was also one of Hank Ballard's Midnighters. Wow! Tailgunner Joe & the Earls of Slander "take their cue straight from the 1960s, delivering neoclassic rock with a gloriously rugged edge." Creative Loafing "Four Star Riot gets a lot of attention from bay area radio, and that's because of the band's rocking sound - all surging guitars and thrashing drums." St. Petersburg Times Nervous Turkey plays "a brand of blues dirtier than a country boy's feet." Sticks of Fire *Winner of a Creative Loafing Tampa Bay 'Best of the Bay' award 2006 &/or 2007.

Here's what you say about
Various Artists - Cheatin' Heart: Tales of Lies & Love.