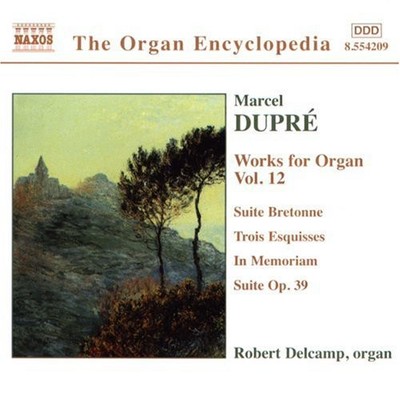 The Suite Bretonne, Op. 21, dates from 1923, and is dedicated to Mademoiselle Hilda Gelis-Didot. She was a close friend of the Dupré family, and was related to the Firmin-Didot family, who have been responsible for many years for the publications of the Institute of France. The suite consists of three, short programmatic pieces inspired by a visit Dupré made to Brittany. Berceuse is a cradle-song, which describes the gentle rocking by a mother of her baby's cradle. It uses a folk-like melody which, when it returns, appears in canon at the octave between the soprano and a 4' flute in the pedals. Fileuse (Spinning) portrays a Breton woman at the spinning-wheel. The whirling of the wheel is portrayed through the use of a running semi quaver (sixteenth note) ostinato in the left-hand, played on the Voix Céleste stop, which continues throughout the piece. Les Cloches de Perros-Guirec (The Bells of Perros-Guirec), a small coastal town near Brest in Brittany, depicts a procession of Breton peasants, jauntily on their way to church on a Sunday morning. In Memoriam, Op. 61, is the largest of the composer's last works. It dates from 1965, and is dedicated to the memory of his daughter Marguerite Tollet, née Dupré, who was born in 1909 and died on 26th October, 1963, after a long illness. It is the last in a series of commemorative works which Dupré composed throughout his career in memory of friends and relatives. In the case of his daughter the grief was intense, and Norbert Dufourcq described the work as "... a votive stone offered in memory of his child." She was an accomplished pianist, and accompanied him on several tours of the United States, performing works for piano and organ with her father. The six pieces are in two volumes, framed by an elegiac Prélude and a brilliant Postlude. In the intervening movements the composer remembers aspects of his daughter's life, from her childhood to her death. Allegretto is perhaps a game of "hide-and-seek", and the Méditation a "bedtime story". The Quod Libet is a series of eight variations on a twelve-note theme, which the composer subjects to a number of slightly humorous turns of phrase. The Ricercare is a sublime piece of six-part counterpoint. It's restrained beauty represents the type of piece that Dupré would often improvise during communion at St Sulpice. The Suite, Op. 39, was published in 1945 and is dedicated to Marguerite Pascouau-Laborde, Dupré's mother-in-law. It's four movements are part of a series of twelve études, which Dupré wrote for his prize pupil Jeanne Demessieux. These pieces were meant as vehicles for the perfection of a virtuoso technique, much in the manner of the transcendental studies Liszt wrote for the piano. Of the twelve studies, nine survive, which include, together with Op. 39, Offrande à la Vierge, Op. 40, (Naxos 8.554026), and Trois Esquisses, Op. 41. Allegro agitato uses chromatic thirds, sixths, and scales to achieve a rapid shimmer of sound. In her diary, Demessieux wrote of this remarkable movement "... one has to hear the noise of millions of agitated molecules in a forest to be able to assimilate the independence of the writing... " Cantabile consists of rich, chromatic harmony in six parts, including a canon between the upper part and the right foot. The Scherzando is a playful, burbling movement, requiring dexterity of both hands and feet as octaves, thirds and sixths are continually present. The Final begins as a gruff, marcato movement of an ominous nature. This gradually gives way to a sense of joie-de-vivre, which grows in intensity to a conclusion of triumph, splendor and brilliance. Trois E, quisses Op. 41, ('Three Sketches') concludes the series of studies Dupré wrote for Jeanne Demessieux. The C major Sketch, excluded by the composer from publication in 1946, was brought into print in 1975 under the editorial supervision of the composer's student, Rolande Falcinelli. It is a brooding, turbulent work that rises to an intense climax and ends quietly. The E minor and B flat minor Sketches were published as Deux Esquissess Op. 41, in 1946, and first performed by the composer on 11th February, 1946, at the Salle Pleyel. They are dedicated to Madame Stéphanie Borneman, wife of the publisher of much of Dupré's music. The first is a scherzo which features repeated notes played on a Bourdon and Tierce. The second is a diabolical toccata for full organ, which uses octaves continually in both the hands and feet.