Karen Gruber - Into My Own 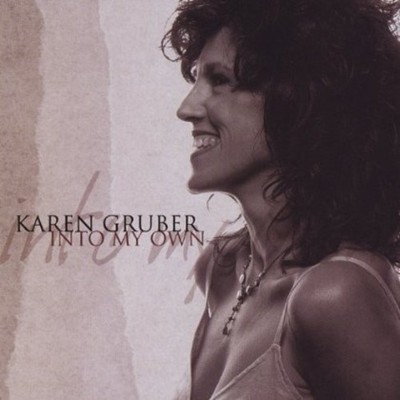 Karen Gruber was born in Florence, Alabama - right across the river from Muscle Shoals, the "hit recording capital" - and she has lived most of her life there except for brief adventures in New Orleans and in Texas. She grew up on the banks of the Tennessee River listening to a wide variety of music. Her earliest influences were Elvis, James Brown, the Beatles, Frank Sinatra, and anything R & B. Later, she moved on to such artists as Julie London, Peggy Lee, Billie Holiday, the Allman Brothers Band, Bette Midler, Santana, and later Sarah Vaughn, Ella, and k.d. lang. Karen performed in community theater in Florence, and at the University of North Alabama. She was the vocalist for the Little Big Band, and she has sung with the Tommy Martin Group, the Sonny Harris Group, the Charlie Rose Trio, and Nice 'N' Easy. Karen performed at the W. C. Handy Music Festival in Florence in the early 80s, and later became a regular up to the present. She has sung in various music and jazz festivals from Alabama to Albuquerque, NM. She has been married since 1982, and has one daughter who was born in 1984. Karen retired from her singing at this time to devote her time and energy to her family, until the year 2000. She couldn't hold it in any longer - she HAD to sing again! As Karen says, "I made a mistake by denying myself the release of expressing my emotions through music for so long. Although I reached a point where I had to sing again, I had locked my voice deep inside and protected 'her' for so many years that I had to fight with myself to let her out. Now when someone asks, 'What do you do?', I can finally say, 'I'm a singer.' The title I chose for this CD, Into My Own, reflects that...finally being comfortable with the little bit of my true self that I'm leaving behind. I've come into my own."

Here's what you say about
Karen Gruber - Into My Own.