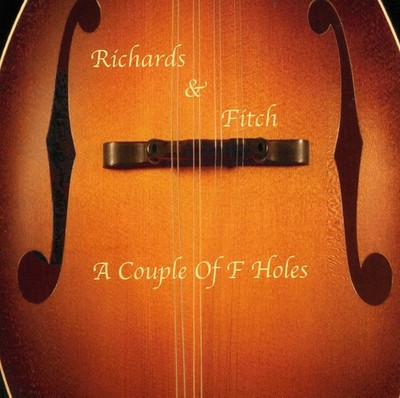 Bobby Richards has worked as a postman, a brewer, a dishwasher, a carwash attendant, a plumbers helper, a convenient store clerk, a swamper, a tilesetter, a landscaper, a sawyer in a mill, and a few others. But through all of these jobs he's always been a songwriter. It's not what he does it's who he is. Reno Fitch is a mandolin player known by many for his carefree attitude and huge beard. The two met at a crossroads. Bobby was making a deal with the Devil and Reno was making a left turn. Bobby got ripped off and Reno got a hitch hiker. Ever since they have been known as Richards and Fitch. Loretta Lynn once said "To be a success you need to be the first, the best or different." Richards and Fitch are not the first, probably not the greatest but you got to give them being different. Taking their inspiration from varied sources as The Muppets, John Prine, Frank Black, Jimmie Rodgers, Kiss, They Might Be Giants, Steve Earle, Hoyt Axton, Phil Collins, and Spinal Tap just to name a few. As a songwriter Bobby Richards takes elements from all these sources and puts them together in songs and stories. If the job of an artist is to thrust his obsessions unto others then Richards and Fitch are a good hire. If that is not what you think an artists job is then you should probably be listening to some overproduced generic pop. A COUPLE OF F HOLES has a collection of fine musicians helping out. Jason Wilbur, who has played with John Prine for quite awhile now, accompanied the boys on half the songs. Tony Marriott contributed Bass to all the tracks. Rowan Lipkovitz plays accordian on Somehow Somebody Sometime. Ian Cameron played some sweet fiddle on Stockboy to Satan. Which also contains a great saw player Andrea Schmidt. Chris Doskoch added some harp and guitars. And Chris, Jenn Ashton (the producer), Aaron Grant and Jerry Wong added back ups.

Here's what you say about
Richards & Fitch - Couple of F Holes.