Ricca Razor Sharp - 12 Steps to a Deffer You 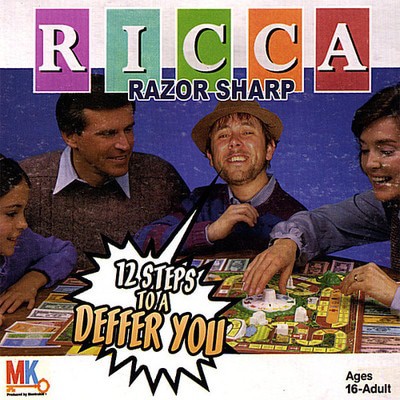 Ricca Razor Sharp is a thinking man's MC, delivering rhymes that are honest and insightful, yet entertaining, clever and witty. His debut album, 12 Steps to a Deffer You, available now on Neferiu Records, has been embraced by the press, college radio, and both mainstream and underground hip-hop audiences. With a host of different styles, Ricca keeps the listener enthralled, whether rhyming on disc or commanding the stage. Ricca's personality has made him a favorite, even when performing before audiences not specifically geared towards hip-hop. His comical yet poignant freestyles often reference current events and involve members of the audience. Ricca's grasp of the MC position results from over 200 performances since 1999, and nearly 2 decades of interest in hip-hop music. Ricca's delivery, non-posturing attitude and slick rhyming abilities are on display on 12 Steps to a Deffer You, produced by the Mantrakid. Ricca is also known for having fronted Phattoe, an alt-rock/hip-hop/funk band that released 2 albums during their 4 year tenure; Phoot in da Doe (2003) and So Good (2004), both of which were supported by Canadian tours. One of Western Canada's most highly regarded freestylers, Ricca has won many high profile rap battles, including Eliminator 2004, Best in the West 2007, and the Ill Movements V8Less Urban Stakes is High battle, the latter of which earned him a spot on a nationally distributed Universal Urban compilation. Says Ricca of his new album, '12 Steps to a Deffer You is a great reflection of my styles, tastes and interests. Mantrakid has served up a tasty dish of beats, fusing old school and new, fresh and original, yet instantly catchy, and I have responded with an album that I can be proud of, mixing progressive, insightful thinking, party jams, and a little bit of sex, drugs and rock & roll.' Ricca Razor Sharp has rocked pubs, clubs, parties, street festivals, and high profile fundraising galas, and has been placed on bills with artists as diverse as Buck 65 and the Wu-Tang Clan's Masta Killa. Ricca can be found on stage, performing material as a solo artist, or as a member of the Audible Intelligence MC crew, in Calgary, AB. In addition, Ricca is the Vice President of Neferiu Productions and co-founder/organizer of the I Heart Alberta Rap Festival, which brings together talent from Alberta's hip hop community for a weekend of performances.

Here's what you say about
Ricca Razor Sharp - 12 Steps to a Deffer You.